Within its 1.8-square mile area, West Hollywood has control of what’s built in the city and how it affects residents.

But when a developer wants to build near the West Hollywood border, the city and its homeowners are left to work within the parameters of Los Angeles’ planning regulations.

Therein lies the problem for a group of neighbors in West Hollywood West. 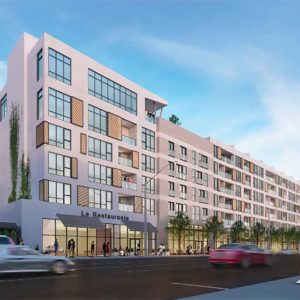 A rendering shows Solstice, a proposed 96-unit apartment building that would be located at 431 N. La Cienega Blvd. Stark Enterprises, an Ohio-based developer, is proposing the project. (photo courtesy of Stark Enterprises)

Over the past month, residents have gathered almost 300 signatures for their petition which will be delivered to Councilman Paul Koretz, 5th District that calls for “safe and responsible development.”

Their concerns are with the size of the building, which would be approximately 80 feet high; the proximity to homes in the West Hollywood West neighborhood, as the developer has proposed a setback distance of zero to 15 feet; and the project’s overall environmental impact on the area and its water table.

Lisa Schwan, vice president of marketing at Stark Enterprises, did not respond to multiple requests for comment.

On its website, Stark Enterprises has a brochure for the project, described as a luxury apartment building named Solstice, with an anticipated completion by fall 2019.

“Situated on North La Cienega Boulevard just one block from Beverly Center in the highly sought after West Hollywood submarket will be a high profile, mixed-use development with prime first floor retail opportunities,” the firm’s description of the project reads. “The property will feature five floors of luxury one- and two-bedroom apartments along with first class amenities, including a rooftop pool and lounge as well as underground parking.”

A rendering of the building shows 150 feet of landscaping that would serve as a buffer between Solstice and the homes directly behind it on Westmount Drive, west of La Cienega Boulevard.

To build Solstice, the company would need to demolish a car wash and commercial building.

Cheryl Getuiza, Department of City Planning spokeswoman, said the project is currently on hold because Stark and its partners haven’t submitted all materials needed for the initial study,  a document that outlines a project’s size and scope.

Once the initial study is submitted to the city, it’s usually followed by a comment period, and then a draft environmental impact report is prepared and reviewed by the city.

“Therefore the Department placed it on hold,” Getuiza said in an email. “The case has not moved forward (no public hearings or environmental publications have been done). City Planning will reassess the project once it becomes active again.”