The group exhibition presents the work of approximately 40 contemporary artists who explore the border as a physical reality (place), as a subject (imagination), and as a site for production and solution (possibility). 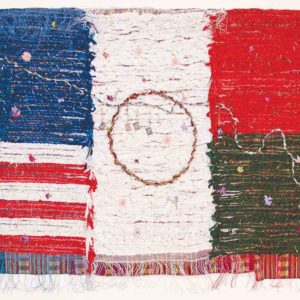 Although the selection largely focuses on work executed in the last two decades, it also includes objects by Chicano artists in California who came together in the 1970s and 1980s to address border issues in their work.

The inclusion of artists from various disciplines, including design, architecture, sculpture, painting and photography, reflects the ways in which contemporary artists and designers themselves cross disciplinary borders.

Since the 1990s, the U.S.-Mexico border has become an important site for creative exploration of issues related to emigration, immigration, labor conditions, hybrid identities and transformation.

The U.S.-Mexico border is often thought to include territory within 100 miles of the national boundaries of the two countries; however, this exhibition’s parameters includes the whole of the 10 U.S. and Mexican states situated directly along the national boundaries. This allows the exhibition to acknowledge the persistence and survival of heritage, and the passing down of traditional skills and techniques within various communities and families on either side of the border.

“The border has been a contentious site for much longer than the current news cycle’s focus on ‘the wall,’” curator Lowery Stokes Sims said. “And though the exhibition has taken on a particular urgency in the current political environment, this project recognizes the border as a long-standing site of interdependence and connectivity, despite the painful divisions it causes.

Things are popping up in Thai Town