A female suspect who allegedly threatened employees at a clothing store owned by the Kardashians in West Hollywood pleaded not guilty on Monday to three felony counts. 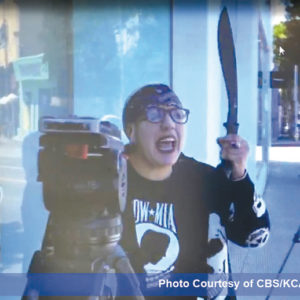 The female suspect was caught on camera after she returned to the DASH store with a machete. (photo provided by the L.A. County Sheriff’s Department/courtesy of CBS/KCAL)

The suspect, Maricia Medrano, 35, allegedly entered the DASH shop in the 8400 block of Melrose Avenue at 11:15 a.m. on Sept. 21 and threatened employees. Armed with a revolver, she allegedly shouted, “stay away from Cuba” before knocking items off a counter and fleeing. DASH is owned by sisters Kim, Kourtney and Khloe Kardashian, who were not present when the incident occurred.

Deputies from the West Hollywood Sheriff’s Station responded to the scene, and searched the surrounding neighborhood by helicopter and on the ground for the suspect. The woman was last seen walking west on Melrose Avenue, but police were unable to locate her.

At approximately 1:25 p.m., Medrano returned, this time armed with a machete, said Sgt. Jeff Bishop, with the West Hollywood Sheriff’s Station. She paced back and forth, and wedged the machete in the door frame before fleeing. Police conducted a second search in the neighborhood, to no avail.

A member of the news media who was at the scene captured footage of the suspect holding the machete and it was broadcast throughout the afternoon. Investigators received numerous calls from the public identifying Medrano as the suspect.

A warrant was issued and police arrested Medrano at a residence in East Los Angeles, Bishop said. Inside the residence were toy airsoft guns. Bishop said police are still looking into whether one of them was the revolver used at the DASH store.

“We were able to get her into custody around 9 or 9:30,” Bishop added. “She was ranting and raving. We don’t know what it had to do with the Kardashians. No one was hurt, that was the good thing.”

Medrano is facing two counts of assault with a firearm, and one count of making criminal threats. She is scheduled to return to court on Oct. 10 for a mental competency hearing.