Aida Vedisheva never wants to stop appreciating being an American.

At 76, the acclaimed performer hasn’t forgotten the years of persecution she faced as a singer in her home country of Russia.

When Vedisheva sang for movies, her name was removed from the credits because the nation’s leaders didn’t like her free expression nor the fact that she was Jewish. In the late 1970s, she was scheduled to perform in front of hundreds at a famous concert hall. The show was abruptly canceled.

In 1980, Vedisheva made the difficult decision to move to the United States, where she quickly fell in love with New York, American values and freedom. 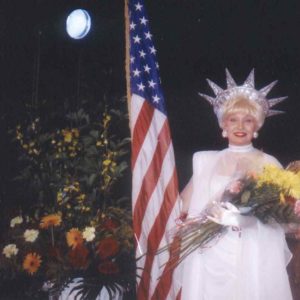 The annual 9/11 remembrance instills American pride in Aida Vedisheva, who has enjoyed the freedoms she didn’t have in her native Russia. (photo courtesy of Aida Vedisheva)

“People are free here,” she said. “People do what they want. People are not afraid of anything. No one tells you how to [live] or what to do. People take for granted this freedom.”

At the event, Vedisheva will perform ballads and songs from her signature musical “Masterpiece and Singing Liberty,” alongside a cast of renowned performers.

Vedisheva, over her lifetime, has made 16 albums that sold more than 30 million copies.

Vedisheva said the level of fame she found in Russia is comparable to an American performer like Barbra Streisand, she said.

She has spent almost half her life in the United States and has performed at Carnegie Hall and Lincoln Center in New York, among several other notable venues.

Born in 1941, Vedisheva’s early childhood is filled with memories of World War II. Her mother, a surgeon, operated on wounded soldiers in a hospital in southwestern Russia. Vedisheva remembers the pain she saw among those soldiers.

In her lifetime, Vedisheva has seen war, faced persecution as an artist, left everything she knew to pursue a dream and survived ovarian cancer.

Vedisheva moved to California after her doctor recommended she live in a place with a dry climate to help with debilitating arthritis. Today, Vedisheva feels energetic and eternally grateful for being able to live in the United States.

She has become a strong advocate for immigrants and has advocated for an Immigrants Day holiday to celebrate the history of how the United States was founded and continues to thrive.

“I will do everything possible to make this country better,” Vedisheva said. “… I love America. I am a patriot.”