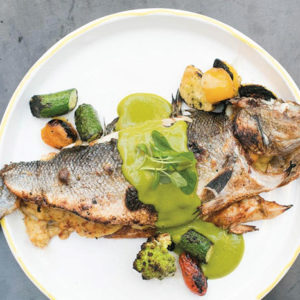 Zarate came back temporarily in 2015 with Once, a pop-up restaurant in Santa Monica. Once means 11 in Spanish, and the Peruvian-born Zarate chose the name because he is the 11th of 12 children. Zarate didn’t sit idle. He started cooking in the kitchen of smoke.oil.salt. with chef Brian Gregg, and wrote a cookbook, “The Fire of Peru.”

His cooking inspired my family and I to take a 10-day trip to Peru. Upon our return, I emailed Zarate to share my culinary experiences. He replied back and to my joy, told me that his restaurant Rosaliné (named in honor of his late mother) recently opened and that I should come in for dinner. We visited Rosaliné for dinner on a Saturday night and the restaurant was packed. Even with a reservation, we waited 20 minutes for a table.

Standing next to the small and crowded bar, we ordered four pisco sours – the quintessential South American cocktail. Piscos are made with Quebranta Pisco, a light-colored brandy made from fermented grape juice. The high-proof spirit is mixed with freshly squeezed lime juice, simple syrup, whipped egg whites and a drizzle of Peruvian bitters, and dusted with cinnamon and served in small ceramic cups resembling flower pots.

Rosaliné is located in the old David Myers Comme Ça space in West Hollywood. Los Angeles-based architect Kevin Tsai re-designed the room with herringbone patterned flooring and tiled walls. Baskets filled with greenery hang from the ceiling and a long, glass skylight and creates an atmosphere reminiscent of the verdant Peruvian jungle. Wood tables and mid-century chairs are complemented by a scattering of bright red metal chairs, adding some color into the room. 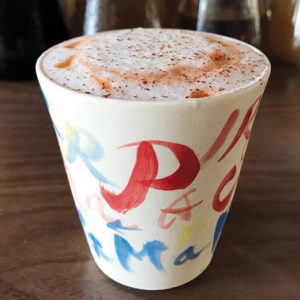 A pisco sour is a quintessential Peruvian cocktail. (photo courtesy of Rosaliné)

The dining room is dark and can get a bit loud, especially when all the tables are filled. The menu is divided into categories: Abrebocas (small plates to be shared), La Familia (larger portions), Mamaqucha (from the sea), Allpa (from the soil), and Pachamama (from the land).

We started with causita crocante –  four crispy potato spheres nestled in a Sea Star Seafoods choice boned salt codfish box. The crispy potatoes with salted cod were topped with a pickled radish and wasabi Dijon mustard that gave it some zest.

Another eye-catching treat was Zarate’s Peruvian causa in a mason jar. I fondly remember him serving it at Once. Zarate starts with a base of Peruvian botija olive aioli and layers it with yellow potato mousse, smooth avocado and beautiful, thick eggplant terrine. It’s served with thickly sliced grilled quinoa bread brushed with oil. The smooth causa spread on bread is filled with earthy flavors.

I also liked his aceitunas, which arrived on a wooden plank accompanied by a bag of turmeric flat bread pieces to scoop up the spicy Peruvian olives, eggplant puree, micro greens and crunchy cancha corn, similar to a corn nut.

Ready for more food, we ordered the chafe paella made with Peruvian fried rice that is cooked in a skillet until slightly crispy on the bottom. The server brought it to our table piping hot and stirred in prawns, pancetta and pork La Chang Chinese sausage in a fermented seafood paste.

We all enjoyed the tender pork osso buco wrapped in banana leaves and surrounded by crispy plantains. The pork was covered with a brick red ancho sauce made from slightly spicy ancho chilies and peanuts. It was served with a pickled hard-boiled egg and soft garbanzo tamale.

Not wanting dinner to end, we ordered two desserts. The first was a small slice of a sour Japanese umeboshi pickled plum tart on top of a purple corn spread with a scoop of a slightly orange flavored Chancaca ice cream and a wisp of cinnamon. The second dessert was Peruvian cake with goat’s milk blended with vanilla bean, sugar and coconut milk and served with Harry’s Berries strawberries and meringue kisses that have been slightly torched to a golden color. A scoop of guava sorbet is offered on the side, and a few maracuya passion fruit seeds are sprinkled atop the cake.

When our bill arrived, our server told us that a 20 percent service charge is included, so there is no need to tip. At the end of the evening, it’s divided among the kitchen and service staff.

I saw Zarate in his open kitchen and whispered to him, “Your mother is looking down so proudly on all of your accomplishments.”

Mother! is a visceral film you will love — or hate