Pull up a lawn chair on Park(ing) Day

The Mid City West Community Council is inviting the public to hang out on Friday in parking spaces being converted into mini parks as part of the annual “Park(ing) Day.”

The events on Sept. 15 from 9 a.m. to 5 p.m. mark the fourth year Mid City West has celebrated Park(ing) Day, an internationally recognized program in which community members convert parking into parks to provide a glimpse into the possibilities of using streets for more than just places to store vehicles. This year, organizers are trying something new by closing a portion of Stanley Avenue between Melrose Avenue and an alley a short distance north of the thoroughfare. The idea is to create a pop-up plaza where people can gather and see what it would be like to have a small park in the Melrose Avenue shopping district. The Melrose Business Improvement District is partnering with the Mid City West on the project. 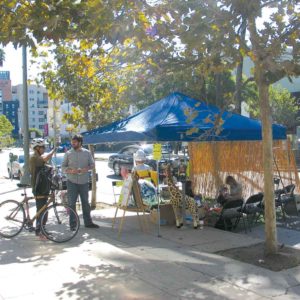 A Park(ing) Day pop-up mini park was created in 2015 on Wilshire Boulevard in front of Miracle Mile Toys and Games. The annual event encourages people to think about other uses for parking spaces. (photo by Gregory Cornfield)

“When you think about public space, you have the National Mall in Washington, D.C., and here in L.A. we have Grand Park, but other than Pan Pacific Park, there is nothing in this neighborhood,” said Mid City West board member Josh Paget, who is organizing Park(ing) Day festivities. “The idea is to think about the space. Park(ing) Day is on a trajectory to bring awareness about the need for public space and the need for green space.”

The Park(ing) Day plaza on Stanley Avenue is one of three locations in the community where the community council is organizing events. Parking spaces will also be converted into mini parks outside Matcha Box at 8036 W. Third St. and Open Space Cafe at 457 N. Fairfax Ave. People are encouraged to stop by, meet neighbors and community organizers and learn about alternative uses for parking spaces.

“I am really excited about it,” said Mid City West Chairman Scott Epstein. “It helps people recognize possibilities. When you think about public space, the streets have a lot of it. Might there be another way to use that space? What other types of things can we do?”

“You can get coffee at a local restaurant and come sit outside,” Paget added. “It’s anything you would otherwise do in a park.”

Epstein and Paget said Park(ing) Day aligns with the Los Angeles Department of Transportation’s “People St” program, in which streets are closed permanently to make way for public spaces and plazas. Paget added he hopes the Park(ing) Day plaza on Stanley Avenue will someday be permanent. It could be used as a location for a bike sharing program and other uses, he added.

“It’s one of those things where I pitch it to people and they don’t understand it, but when you walk by and see it, it immediately clicks,” Paget said. “You say, ‘Why aren’t there more of these?’ Come experience it for yourself.”