A 27-year-old man who was shot and killed on Aug. 28 near Melrose Avenue has been identified as Damien Dehawn Scott Jr., of Los Angeles. 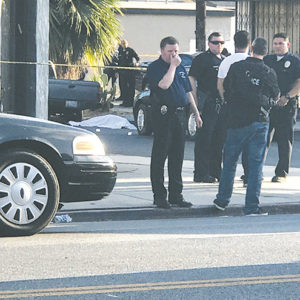 Police cordoned off the area around Melrose and Sierra Bonita avenues on Aug. 28 after a man was shot and killed. (photo by Peter Nichols)

Police are still searching for the gunman who shot Scott at approximately 5:45 p.m. near the corner of Melrose and Sierra Bonita avenues. The homicide is believed to be gang-related, but the exact motive remains unknown.

The incident was reported by an undercover officer who was driving in the area and heard shots. The victim was found lying in the street suffering from multiple gunshot wounds. The suspect, described as a black man approximately 20 to 25 years old, was last seen fleeing in a dark-colored SUV east in an alley just south of Melrose Avenue.

The homicide is the latest in a series of incidents causing concern among residents and business owners in the Melrose Avenue shopping district. On July 3, a suspect entered an apartment on Ogden Drive and sexually assaulted two women. The case remains unsolved.

On Aug. 9, a man who was allegedly involved in a case about a graft scandal in Indonesia barricaded himself in a house on Edinburgh Avenue for hours before allowing his wife and child to leave. The man later committed suicide. Dozens of police cars flooded the area and streets were closed during the stand-off.

“[The homicide] is the third very serious incident we have had recently, first with the sexual assault and then the barricaded suspect and now this,” said Peter Nichols, co-founder of the Melrose Action Neighborhood Watch. “There have also been a couple of robberies on Willoughby.”

The Melrose Action Neighborhood Watch held a meeting with the Los Angeles Police Department last night to discuss recent crime trends. Representatives from the LAPD’s Wilshire Division are also holding a “Coffee with a Cop” event on Wednesday, Sept. 13 from 8 to 10 a.m. at the Starbucks near Melrose and Spaulding avenues. Authorities with the Wilshire Division did not return calls seeking comment about crime in the Melrose area prior to press time.

The recent incidents are not linked. Nichols did not know why high-profile crimes have been occurring recently in the area, but surmises it is likely a combination of factors including the warm weather, criminals coming to the area because they know there may be targets, and large numbers of people gathering for events at clothing stores and similar businesses promoted on social media.

“I am hoping it’s an isolated incident and not a trend,” Nichols said. “I think neighbors in the area are very concerned.”

Anyone with information about the murder near Melrose and Sierra Bonita avenues is asked to call the LAPD’s West Bureau Homicide Unit at (213)382-9470.