Highland Avenue was closed for hours between Hollywood Boulevard and Johnny Grant Way on Sept. 26 while police investigated the shooting of rapper Young Dolph. 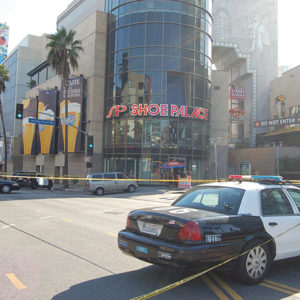 Officers closed Highland Avenue while an investigation was conducted after rapper Young Dolph was shot and critically wounded on Tuesday. (photo by Edwin Folven)

The shooting occurred shortly after 1 p.m. in a valet parking area for the Loews Hollywood Hotel on Highland Avenue. Los Angeles Police Department Det. Meghan Aguilar said Young Dolph, whose real name is Adolph Thornton, Jr., was staying at the hotel. He was waiting for a vehicle when three men approached him. An argument and fight ensued, and the rapper was knocked to the ground.

“One of the men pulled out a handgun and fired multiple rounds,” Aguilar said. “We don’t know what prompted the argument.”

The rapper ran into The Shoe Palace, a nearby business at the Hollywood and Highland center. Authorities were called and paramedics took the 32-year-old victim to the hospital in critical condition.

Aguilar said one of the men jumped into a gold Cadillac Escalade and drove a short distance to a gas station parking lot near Highland and Franklin avenues, where he abandoned the vehicle and fled on foot. The other two men also fled on foot.

One man was detained a short distance from the scene, but it is unclear whether he was involved in the shooting, Aguilar said. Anyone with information about the shooting is urged to call the LAPD’s Hollywood Division at (213)972-2967.