The Los Angeles Zoo has announced the birth of two endangered snow leopard cubs that were born earlier this year on May 12 and May 13 to three-year-old mother Georgina and five-year-old father Fred. 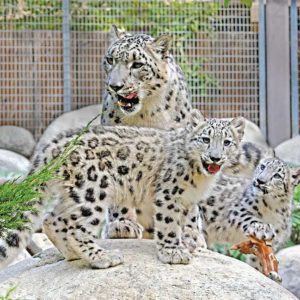 The male and female cubs are the first offspring for the snow leopards that were paired in July 2015 as a part of a Species Survival Plan. The cubs spent months out of public view while they bonded with their mother and got to know the zoo’s animal care staff. At four months old, the cubs have gained enough strength and coordination to navigate their outdoor habitat and make their public debut.

“We’re so excited to welcome these cubs,” said animal keeper Stephanie Zielinski. “There is less known about these beautiful cats than most of the other large cat species due to the extreme habitat snow leopards have evolved to live in the wild. This is why it’s such an honor to be able to educate the public and give them the opportunity to observe this elusive species here in Los Angeles.”

The zoo’s animal care staff began working with the cubs early, separating the mom for short amounts of time to allow her rest and to help her grow accustomed to staff being around her to young. The interactions with the cubs helped staff conduct regular exams and give vaccinations. It eventually led to an easier transition when introducing the cubs to their outdoor habitat.

Snow leopards in the wild are found in cold, high-elevation mountainous environments in 12 countries in Central Asia. Snow leopards have evolved to have a large nasal cavity allowing them to breathe thin air and retain oxygen. The cats have thick fur to keep them warm and a long tail they wrap around themselves for added heat and protection. Additionally, snow leopards’ paws have hair cushions that act as snowshoes and provide protection from sharp rocks. Smoky gray and blurred black markings on their pale gray or cream-colored coats provide camouflage in the mountains.

While snow leopards have adapted to the cold, barren landscape of their high-altitude homes, human threats have created an uncertain future for the cats. Habitat destruction, prey base depletion, illegal trade, poaching and conflict with local populations have led to a significant decline in numbers. There is estimated population of 2,000 to 7,000 snow leopards left in the wild.

Guests of the Zoo can view the cubs, which currently weigh approximately 22 pounds each. The cubs and their mother will transition on and off exhibit various times throughout the day, also allowing outdoor time for the adult male snow leopard, Fred.