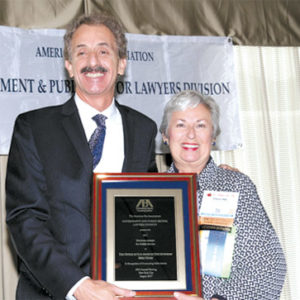 “It’s extremely gratifying to be the first city attorney’s office in the nation to receive this distinguished award,” Feuer said. “Our team does transformative work on so many issues, from protecting consumers – as with our lawsuit against Wells Fargo over fake accounts – to criminal justice reform, gun violence prevention, community-based efforts to make neighborhoods safer and advance environmental justice, and much more. The ABA’s recognition inspires us to take our work to yet another level in the days ahead.”

“We are so pleased to honor the nation’s public sector heroes,” Weaver said. “The Hodson Award goes to the Office of the Los Angeles City Attorney Mike Feuer based on the office’s extraordinary achievements in consumer protection, gun violence prevention and criminal justice reform.”

The Los Angeles City Attorney’s Office’s responsibilities stand out among public law offices. They include suing on behalf of the city of Los Angeles, and on behalf of the people of the State of California, and vindicating public rights in cases that frequently have statewide and national impact.

The office also prosecutes approximately 45,000 misdemeanor cases each year and has established neighborhood-based, restorative justice programs to reduce recidivism and divert low-level offenders from the criminal justice system. Additionally, the Los Angeles City Attorney’s Office provides advice on public policy issues to Mayor Eric Garcetti, the Los Angeles City Council and every city department, board and commission. The city attorney’s office also helps draft all municipal legislation and serves as counsel to Los Angeles International Airport, the Port of Los Angeles and the Los Angeles Department of Water and Power, defending the city in civil litigation on matters ranging from police conduct to land use.