Yavneh Hebrew Academy teacher Jenny Zacuto knew she had to join faculty and students for a morning assembly on Sept. 25.

But the ensuing announcement at the K-8 school, located at 5353 W. Third St., was a surprise to her and everyone else in attendance: Zacuto had been selected as one of four teachers at local Jewish day schools who will each receive a $15,000 cash reward for their work in the classroom. 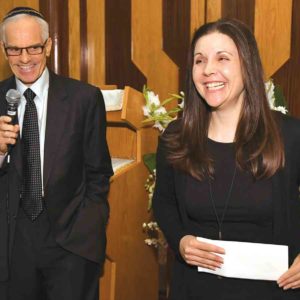 Jenny Zacuto, right, did not know she had been selected to receive the annual prize until her name was called in front of faculty and students by Richard Sandler, left, during an assembly on Tuesday. (photo courtesy of the Milken Family Foundation)

The Milken Family Foundation established the annual surprise – the Jewish Educator Awards – in 1990 to honor teachers at schools affiliated with Builders of Jewish Education, an organization that furthers Jewish education in the Los Angeles area.

Richard Sandler, the foundation’s executive vice president, reminded the Yavneh students how frequently the public honors the best athletes, reality show contestants and other celebrities. But teachers, he said, are the unsung heroes in their communities.

“We believe in celebrating excellence in those who teach you,” he said. “We understand they have the most important job in society.”

Minutes later, he opened an envelope and read the name of Zacuto, a language arts teacher who has been with the school for 18 years. All eyes turned toward the back of the school’s chapel, where she was seated, followed by applause.

“I feel incredibly humbled and lucky,” she told the students. “… My wish for all of you in this room is that you get to do something you love as much as I love teaching.”

She and the three other educators will receive their rewards on Nov. 30 during a luncheon at the Luxe Sunset Boulevard Hotel, and they’re free to spend it however they want. After the assembly, Zacuto said she doesn’t yet have any ideas for what to do with the money.

The three others awards were handed out to Yehudis Blauner, general studies principal at Cheder Menachem; Adrienne Coffield, director of academic technology at Brawerman Elementary School; and Melody Mansfield, an English and creative writing teacher at Milken Community High School.

Each year, award recipients are chosen from a pool of approximately 800 teachers throughout L.A.’s 37 Jewish day schools who have served at least seven years and work at least 15 hours per week. Winners are selected by a committee of members from the local Jewish community, which considers criteria such as educational talent, ability to instill character and self-confidence in students, commitment to professional development, and evidence of originality, dedication and capacity for leadership and self-direction.

“What could be more essential to the Jewish future than ensuring that our youth achieve their academic potential, lead lives that contribute to improving our communities and grow to embrace the joys and responsibilities of their Jewish heritage?” Sandler said. “Outstanding Jewish day school educators are vital to this mission.”