Detectives are still searching for a suspect who sexually assaulted two women in a Fairfax District apartment on July 3, and are asking for the public’s help identifying the perpetrator. 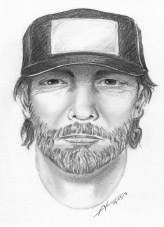 Police released a sketch of the suspect wanted for the sexual assaults in the Fairfax District. (photo courtesy of the LAPD)

Patrols have been increased in the neighborhoods around the apartment building on Ogden Drive. Detectives have interviewed nearby residents and are searching for security cameras that may have captured footage of the suspect.

“It’s an ongoing investigation,” said Det. Dara Brown, with the Los Angeles Police Department’s Robbery-Homicide Division, Special Assault Section. “We have received a lot of tips and followed up on those tips, but there has been nothing so far. We are going to continue canvassing the neighborhood looking for security cameras. We want anyone with information give us a call.”

The incident occurred at approximately 11:50 p.m. on July 3 at a building in the 400 block of North Ogden Drive. Wilshire Division officers responded to a call from the victims’ neighbors, who heard one of the victims scream.

Brown called the attack an isolated incident because nothing similar occurred in the area before or after the attack. The suspect may have seen the opportunity to enter when the victims were going in and out of the apartment. The victims reportedly moved out permanently after the incident.

Brown added that the suspect is not believed to be a transient. She said police are investigating whether he lives in the area.

The suspect was described as white, 30 to 40 years old, 5 feet 10 inches to 6 feet tall, and approximately 160 to 180 pounds. He had a short brown and gray beard. A police sketch of the suspect was released.

Anyone with information, including possible additional victims, is urged to call Dets. Daniel Aguirre, John Macchiarella or Dara Brown, with the LAPD’s Robbery-Homicide Division, Special Assault Section, at (213)486-6910. During weekends and off-hours, call the LAPD’s hotline at (877)LAPD247.