The city of Los Angeles was formally awarded the 2028 Olympic and Paralympic Games on Wednesday after a unanimous vote by the International Olympic Committee in Peru, where Mayor Eric Garcetti and other city officials were in attendance.

The vote confirmed an agreement reached earlier this summer among Los Angeles, Paris and the IOC that Paris will host the 2024 Games, followed by L.A. in 2028. Both cities were originally vying for 2024. 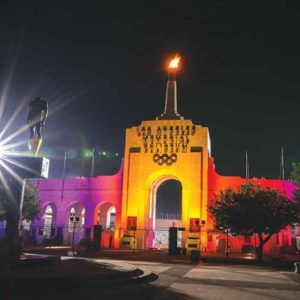 The Los Angeles Memorial Coliseum glowed with the colors of the LA 2028 logo in anticipation of Wednesday’s vote by the International Olympic Committee to confirm Los Angeles as host of the 2028 Summer Games. (photo courtesy of the mayor’s office)

Garcetti, speaking before members of the IOC and the delegation representing Paris, which was awarded the 2024 Games, recalled watching the 1984 Olympics in Los Angeles as a 13-year-old.

“You planted a dream that today is coming true,” Garcetti said, addressing the IOC members.

The mayor was flanked by council members including Mitchell Englander, Joe Buscaino and Gil Cedillo as he signed the host city contract with IOC President Thomas Bach.

The vote culminated an unlikely victory for Los Angeles after the United States Olympic Committee originally endorsed Boston as the U.S.’s primary candidate for the 2024 Games. Two years later, Los Angeles and Paris were the two cities left standing. The process took an unprecedented turn when IOC leaders earlier this year broached the idea of simultaneously awarding the 2024 and 2028 Games this year, a first in Olympic history.

“We held fast to the notion that Los Angeles’ objective is to do what’s right for the Olympic movement,” Garcetti said.

The 2024 Games will mark a centennial celebration for Paris, which also hosted the 1924 Games. Four years later, Los Angeles will join Paris and London as the only cities that have hosted the games three times.

“Nothing brings humanity together better than the Olympic Games,” said Allyson Felix, an Olympic gold medalist and California native.

Public polling has shown widespread support by Los Angeles residents for hosting the games again. Some residents cite the adverse economic effects past host cities have suffered in protest of bringing the games back to Los Angeles. But city officials, including council members on the Ad Hoc Olympic Committee, have remained confident that the city will profit from the games and put portions of the money toward youth sports and other programs. Los Angeles earned more than $200 million from the 1984 Games. In 1932, when Los Angeles first hosted the games, financial records were not disclosed, but newspaper accounts at the time claimed the city profited $1 million.

The City Council last month unanimously voted to accept the 2028 Games despite financial variables it will have to fill in over the next decade. Pending state legislation would contribute funding to offset any cost overruns.

The 11-year wait to host the games gives Los Angeles additional time to address infrastructure needs of the athletes, residents and visitors who will come to the city. Metro’s Purple Line Extension is expected to be in operation by then, and the city of West Hollywood has been working to add more public transportation.

“We’ve been great partners before and I’m certain we will be again,” said Casey Wasserman, chairman of LA 2028, the city’s Olympic exploratory committee.

“We have a golden opportunity to address some of the current issues we face in Los Angeles, leveraging the 2028 Olympic Games to build a lasting legacy,” he said in a statement after the vote on Wednesday.

Made in Hollywood celebrates local productions