Give clothing for LGBTQ homeless youth

“Homeless people already face numerous obstacles to employment, and openly LGBTQ and gender nonconforming people are doubly disadvantaged,” Galperin said. “With this clothing drive, we’re seeking to give people opportunities to get the jobs they want and to realize their dreams. One suit, blazer or pair of shoes can make all of the difference for someone at a critical juncture in his or her life.” 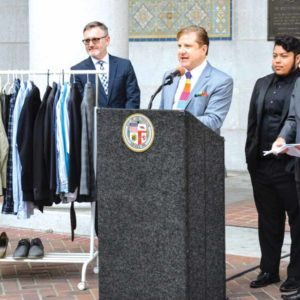 “I am committed to helping people find jobs, and that includes assisting those who face barriers to employment,” O’Farrell said. “With this clothing drive, we’re hoping to reduce at least one of those barriers by helping job seekers of all ages look and feel their best during interviews for employment or to launch their professional careers.”

Angels Flight reopens after closing in 2013