The Fountain Theatre will donate a portion of all ticket sales from its upcoming production of “Runaway Home” to the Houston Food Bank. 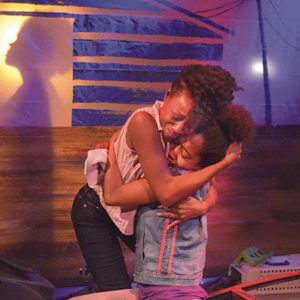 “Runaway Home” is set during the aftermath of Hurricane Katrina.

“‘Runaway Home’ is about the people of New Orleans rebuilding their lives after Katrina,” Fountain co-artistic director Stephen Sachs said. “The play puts a human face on citizens rebounding from the hurricane and flooding, and the government’s role (and inefficiency) in that recovery. With so many homes destroyed and families struggling after Hurricane Harvey, the play could not be more timely.”

A new play about the power of community, “Runaway Home” is set in New Orleans’ Lower Ninth Ward three years after Katrina. In the play, 14-year-old runaway Kali embarks on a journey to pick through the wreckage of what used to be her life, rhyming, stealing and scamming her way through the still-destroyed neighborhood.

While the rest of the country’s attention drifts away from Louisiana, the community’s residents are left to repair the damage from the inside out. Playwright Jeremy J. Kamps was inspired by his experiences volunteering in New Orleans two years after Katrina, stripping homes to the studs to remove mold.

The Houston Food Bank is a nonprofit organization providing food and supplies for people affected by Hurricane Harvey.

In addition to contributing to the Houston Food Bank, the Fountain will make materials about disaster relief, climate change and social action available in the lobby and schedule a series of post-show discussions.

Tickets range from $20 to $40, and every Monday night is pay-what-you-want. A portion of all ticket sales will be donated to the Houston Food Bank.

For more information and to purchase tickets, call (323)663-1525, or visit FountainTheatre.com.

‘The Red Shoes’ to be performed at Ahmanson Theatre until October