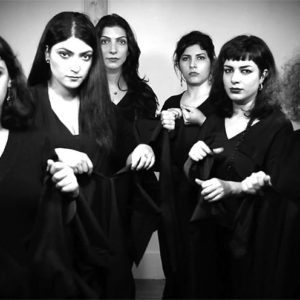 “Strappa,” directed by Sepideh Salehi, is a finalist for the Farhang Foundation Short Film Festival. (photo by Spider Salehi)

The films will be screened Saturday, Sept. 30, with the top three winners announced and awarded.

The screenings will be followed by an awards ceremony hosted by Iranian-American comedian and actress Melissa Shoshahi. This red-carpet event is followed by an exclusive cocktail reception in honor of the filmmakers.

The Farhang Foundation Short Film Festival is the one of the only film festivals in the United States that’s devoted to fostering cultural understanding and awareness of Iranian art and culture. It has also become a springboard for filmmakers.

This year the event will be at UCLA’s Schoenberg Hall, and is presented in collaboration with the prestigious Herb Albert School of Music, one of Farhang Foundation’s newest cultural partners in Los Angeles. The selected films cover the gamut of genres – narrative drama, experimental, animation and music video. Taken together, they reveal a culture rich in film, music, dance and storytelling.

The festival is open to filmmakers of any background. The only requirement is that the films pertain to an aspect Iranian culture, such as the arts, history, lifestyle, history, crafts, geography and politics. The top three winners will receive cash prizes of $10,000, $5,000 and $3,000. The films are all subtitled in English and can be screened by the public at FarhangFilmFest.org.

Farhang Foundation is a nonreligious, nonpolitical and not-for-profit foundation established in 2008 to celebrate and promote Iranian art and culture for the benefit of the community at large. The foundation supports a broad range of academic activities in Southern California by funding university programs, publications and conferences. In cooperation with various cultural and academic institutions, Farhang Foundation funds major programs and exhibitions about Iran and its culture.