Two earlier works by De Larios will be on display in LACMA’s “Found in Translation: Design in California and Mexico, 1915–1985″ exhibit, part of the sweeping Getty-supported Pacific Standard Time: LA/LA initiative running Sept. 17, 2017 to April 1, 2018 throughout Southern California.

The groundbreaking LACMA exhibition, and accompanying book, is centered on the design dialogues between California and Mexico. The show explores how modern and anti-modern design movements defined both locales throughout the 20th century. 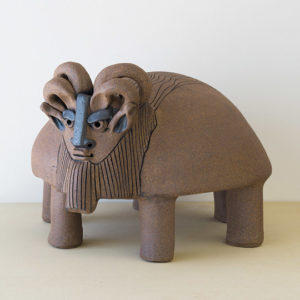 “I’m extremely honored to be among such significant work in LACMA’s  Pacific Standard Time exhibition because of its important historical recognition,” De Larios said.

Several of De Larios’ recent sculptural work, along with two new serigraphs, will be part of the Getty sanctioned Pacific Standard Time exhibit at the Craig Krull Gallery in Santa Monica opening with a reception on Saturday, Sept. 9 from 5-9 p.m. and running through Oct. 14.

In the Craig Krull exhibit, De Larios will be one of three featured artists along with Carlos Almaraz and Gilbert “Magu” Luján, two of the four co-founders, along with Robert de la Rocha and Frank Romero, of the Chicano art movement which led to the artists’ collective “Los Four,” the subjects of a 1974 LACMA exhibit that gave recognition to the significance of Chicano art as a distinct style.

De Larios’ artistic point of view was shaped by growing up in downtown Los Angeles near Temple Street in the 1930s and 40s. She was influenced by her family as well as her community, which included Japanese neighbors who spoke fluent Spanish.

De Larios made frequent trips to Mexico with her parents. When she was just 6 years-old, the 24 metric ton Aztec calendar in Mexico’s Museum of Anthropology left an indelible impression on her and she decided that she was part of the Aztec calendar and the calendar was part of her.

“I began to see the patterns and similarities between myths in the various cultures,” De Larios said. “There were different names for the deities, but they served the same purpose. They were positive or destructive forces.”

Conservatory hosts benefit at its new home in Hollywood