Park users reported general satisfaction with their local parks, but many said cleanliness and safety concerns deter them from using their community parks more often. 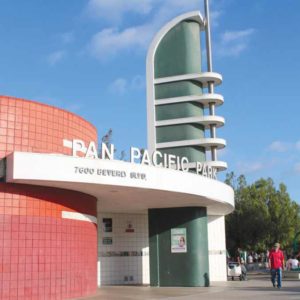 The controller’s report urged the city of Los Angeles Department of Recreation and Parks to systematically grade L.A.’s parks to push for improvements to safety, sanitary conditions, environmental sustainability, and programs and services, while being transparent with Angelenos about the results.

On Thursday, Galperin launched parkgrade.la, an interactive map of city parks to display the grades, a community survey, in-depth environmental case studies and social media snapshots of how Angelenos use their local parks.

Pan Pacific Park, 7600 Beverly Blvd., received a B+ overall. Its lowest mark was a C+ for its bathrooms, but the 32-acre park received high marks for its children’s play area, outdoor courts, and the exercise areas and trails.

The park’s basketball court was noted in the report as clean, well-maintained and in use. Additionally, it had three playgrounds “with shade and sturdy equipment.” However, Pan Pacific Park also had a wet and soapy bathroom with an unusable restroom in the middle of the park.

Grades were based on site visits of 40 of the city’s 95 specifically designated community parks ranging in size from less than an acre to 77.6 acres. Professional reviewers, including KH Consulting Group, University of Southern California faculty and the RAND Corporation, assessed the condition of various amenities and facilities.

“Our parks are so important to our quality of life, providing recreational outlets for all ages, much-needed green space and venues for community-building,” Galperin said. “I hope City leaders will use my report card to drive improvements at City parks to better serve all Angelenos.”

Galperin noted the challenges faced by the city’s Recreation and Parks department in having added 37 parks for a current total of 444 parks in the past nine years. At the same time, money for park maintenance has shrunk to about $81 million, and staffing was cut by 33 percent, from 2,117 employees to 1,421 employees over the same period. The rise in homelessness, he said, has added to the challenge of maintenance.

Galperin advised exploring funding sources for maintenance and upgrades, such as special city funds that typically have been used for new parks.

A survey of more than 3,700 park users offered similar assessments of the community parks as the consultants. Safety concerns were cited by 46 percent of respondents as deterrents to using parks more; 37 percent cited maintenance as their largest concern. Generally community parks in the west side of the City and West San Fernando Valley fared best, while those in the East Valley and downtown, south of downtown and Eastside areas received lower grades.

“It is the Department’s goal to ensure that the City has a clean, safe, innovative and accessible park system that serves the entire Los Angeles community,” said Michael Shull, general manager of the Department of Recreation and Parks. “We are proud of the work our staff performs daily but also acknowledge the need to continuously innovate and improve.  We appreciate the collaboration with the L.A. Controller’s Office and look forward to staying closely engaged with the public to share our progress and hear ideas and feedback as we move forward.”

LAUSD’s chief academic officer recognized for use of technology