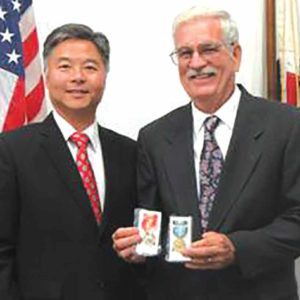 Patton had initially contacted Lieu’s office in hopes of obtaining one medal he knew he was eligible for. But while working with the Department of Navy, Lieu’s office obtained not only one, but two medals Patton rightfully deserved. Patton’s impressive military awards and decorations will now include the National Defense Service Medal and the Antarctica Service Medal.

“It is a great honor to present not only one, but two medals to Petty Officer Patton and recognize him for his dedication and contributions to our country,” Lieu said. “When I heard about his situation, I made a direct inquiry to the United States Navy to make sure he received the awards he so rightfully deserved. I join my fellow Americans in thanking him for his great service.”

Patton, born in Berkley, Michigan, moved to Southern California at a young age and is a graduate of Banning High School in Wilmington, California. He served in the Navy during the 1960s and was stationed on the U.S.S. Tom Bigbee in Pearl Harbor, Hawaii. His service includes tours of the Marshall Islands, Guam, the Philippines, Japan, Hong Kong and Antarctica.