“Tulip Fever” is based on a novel by Deborah Moggach, who also wrote “The Best Exotic Marigold Hotel,” which was well-received when adapted to film. 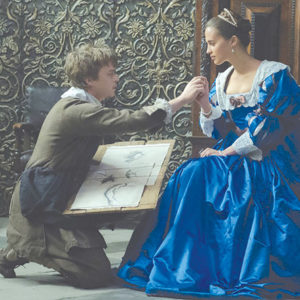 Fifteen years after the film option was purchased, it went into production in May 2014.

Moggach recently noted on her website that, she (and fans) have waited years for “Tulip Fever” to finally be released in theaters.

“This is apparently a good time as everyone will be fed up with all those summer blockbusters and franchises and will be longing for something arty and intelligent,” she wrote.

“Tulip Fever” does attempt to be “arty and intelligent,” but the film – although well-shot and featuring great costumes – falls short of delivering on story.

Swedish actress Alicia Vikander plays Sophia, a girl who grows up in 17th century Amsterdam in an orphanage and is eventually sold to Cornelis Sandvoort, a childless merchant desperate for an heir to his fortune.

Vikander – slated to play Lara Croft in the 2018 “Tomb Raider” film – gives a believable performance, portraying how much torment she feels living with Cornelis.

Upon first meeting, Sophia and Jan realize they’re in love.

“Tulip Fever” attempts to create a love story between Sophia and Jan, but they barely share a conversation throughout the entire film. Their young love feels believable at first, but when you take a step back, beyond two pretty people who recognize each other as pretty people, where’s the love?

A much more compelling love story is told through the subplot of Maria, a house maid (Holliday Grainger), who is desperately in love with Willem Brok, a fish seller, played by Jack O’Connell.

Willem and Maria’s love story blossoms as the two sneak around to see each other and bring each other a giddy joy that’s relatable and endearing.

Producer Alison Owen said she was drawn to “Tulip Fever” because it was a fascinating read with a complex story.

“It’s got so many layers it’s hard to condense them, but that’s the challenge, trying to fit everything into the script,” she noted in the film’s publicity materials. “It’s a fantastic love story set against this amazing backdrop, and at the heart of it, it’s a metaphor about love, lust and passion.”

It’s frustrating – for both the audience and the talented people who worked on the film – that the very thing that originally drew Owen to bring “Tulip Fever” to the big screen, its many layers, is the thing that makes this film hard to enjoy.

In “Tulip Fever,” it’s difficult to comprehend whose story the film is meant to tell.

Is it Sophia’s story of escaping her husband who assaulted her for a few years in hopes of producing a child?

Is it Maria’s story of escaping poverty to be with Willem?

It even feels like a story that could be focused on Cornelis, who references his earlier life in which he was unkind to his previous wives, and thus, that’s likely why Cornelis isn’t the evil, overbearing husband we’re used to in history pieces like “Tulip Fever.” The audience might expect they’ll hate Cornelius, so it’s interesting how likeable he ends up being.

“Tulip Fever” isn’t an uninteresting film. In fact, its problem is largely that it’s too interesting with too many moving parts and characters you want to follow. Much of the acting is heartfelt, and hey, there’s even a small role for actor/comedian Zach Galifianakis.

The film is a nice break from some of the more mindless summer films, but “Tulip Fever,” yet again, isn’t a win for Hollywood.