The Los Angeles City Council approved a settlement on Sept. 20 with the First Amendment Coalition in a lawsuit over the length of time the city keeps public records available for public review.

The lawsuit stemmed from boxes of documents that were sent for destruction after former Councilman Tom LaBonge, 4th District, left office in 2015. They were among 113 boxes that a former LaBonge staff member allegedly sent to Piper Tech, a city facility, to be destroyed. Most of the boxes were destroyed, but the Los Angeles City Attorney’s Office found 35 boxes – some marked “burn” – and returned them to LaBonge’s successor, current Councilman David Ryu. 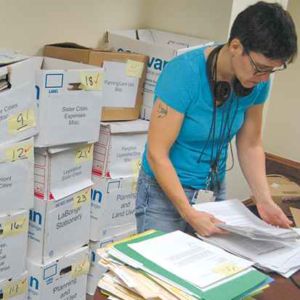 The boxes contained volumes of documents related to planning and land use issues, city departments, the Los Angeles Sister Cities program, L.A. Marathon, historic preservation and legislative issues. LaBonge said they were mostly notes and other records that were either duplicates or were documents he believed were expendable. Ryu made the contents of the boxes available to the public in February 2016.

The boxes were at the center of a controversy over how long public documents should be kept. Ryu said at the time that LaBonge left him no records when he departed office, and that he had hoped to work with the former councilman on a smooth transition.

LaBonge said he received no such invitation from Ryu or his staff and was given no instruction about what to keep before leaving. The boxes were turned over to the city’s General Services Department, which was standard procedure for exiting council members, LaBonge said.

In the months following the revelation about the boxes, Ryu authored a motion to create rules about council record retention. The First Amendment Coalition also filed a lawsuit to force the city to abide by such rules, said coalition executive director David Snyder.

Under the settlement, the city will retain public document for two years, unless stipulated otherwise by other regulations. The Los Angeles City Attorney’s Office issued a statement in response to the settlement.

“This settlement reinforces the city’s commitment to transparency,” the statement read.

“It is in the public interest for elected offices to create orderly transitions between one elected official to the next,” Ryu’s statement read. “My office introduced a motion in the fall of 2015 to ensure that our city prioritizes transparency and access to information.”

Snyder said he is satisfied with the settlement, and added that the lawsuit was necessary because state law does not stipulate exactly how long records should be retained. State law implies that most records can be destroyed after two years, or after consultation with the city attorney and other officials, but the law is ambiguous, Snyder said.

Document retention is necessary for California Public Records Act requests, Snyder added. The coalition had requested documents purportedly from LaBonge about the Los Angeles Department of Water and Power, the California Film Commission and a housing development in Sherman Oaks, and the was told by city officials that the records did not exist.

Under the settlement, the city is required to notify the First Amendment Coalition if any changes occur to the rules. The city will also reimburse the coalition for $20,000 in legal fees.

LaBonge said on Monday that he is glad to have the controversy behind him, and reiterated that he did not ask that any documents be destroyed that were not duplicates. He added that many of his documents were sent to the pertinent city departments, and other materials were donated to city archives and local schools.

“I was never contacted about what to do when vacating our offices. We were told we had to get out of there,” LaBonge said. “The departments had the originals and most of the materials had been donated to the archives. I just think there was some confusion about what happened.”