Between 1967 and 1977, the Chicano newspaper-turned-magazine La Raza both witnessed and participated in the struggle for social justice as it unfolded across Los Angeles and into the world beyond. 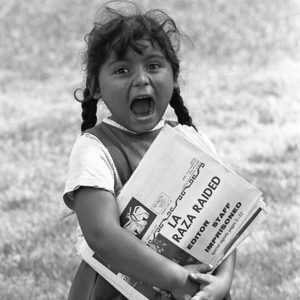 Marking the 50th anniversary of the publication’s founding, and drawing from a previously inaccessible archive of more than 25,000 images recently gifted to UCLA’s Chicano Studies Research Center, the exhibition “LA RAZA” opened Sept. 16 at the Autry Museum of the American West in Griffith Park.

On Oct. 15, photographers featured in the exhibition will discuss their work through the lens of today, examining their role and the magazine’s place during a tumultuous period of American history.

Featuring photographers Devra Weber, Raul Ruiz, and Joe Razo, the panel will be led by Amy Scott, the Autry’s chief curator and co-curator of “LA RAZA.” The event is included in museum admission and free for Autry members. To RSVP, visit theautry.org.

Before the seminar, Turquoise, Copper, Shell and Silver members can participate in the “Morning at the Museum” program for a light breakfast and a curator-led tour of the exhibition from 9 a.m. to 11 a.m.  Space is limited. To RSVP, call (323)495-4380 or email memberinfo@theautry.org.

“LA RAZA,” which runs until Feb. 10, is part of the Getty-led Pacific Standard Time: LA/LA initiative. “LA RAZA” contributes to the exploration of Latino art and identity in dialogue with the city of Los Angeles.

The editors of “La Raza” adopted a groundbreaking format in which photojournalism combined with art, satire, poetry and political commentary in order to organize and inspire the Chicano community to activism and to reimagine concepts of citizenry.

“We are proud to share this powerful, first-hand account of an important yet under-represented movement in the Civil Rights era,” W. Richard West, Jr., Autry president and CEO, said. “It is especially momentous to present this photographic archive — one that continues to resonate today—as part of ‘Pacific Standard Time: LA/LA,’ further underscoring the influence of the Chicano Movement and its artists on the cultural and societal fabric of the American West.”

Featuring more than 200 of the archive’s most compelling and powerful images, the collection invites analysis of the photographers’ aesthetic strategies as well as the interdisciplinary format in which they are situated.

The Autry is located at 4700 Western Heritage Way. For more information, visit theautry.org.