If you build an oven, they will bake

When a group of Angelenos set out to build a community oven a few years ago, their hope was not only to inspire more people to train as bakers, but also to build community.

On a recent Saturday in mid-September, as people streamed into the back lot of Holy Nativity Episcopal Church, carrying baskets of bread dough, it was easy to see that the group’s mission had been accomplished.

Each month, the Los Angeles Bread Bakers, a Meetup group formed in 2011, host a pizza and bread bake at the community oven at the church in Westchester. 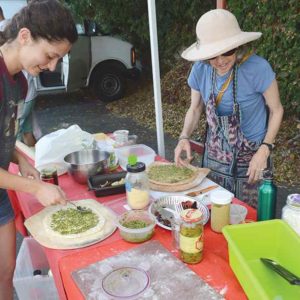 Alexis Luther, left, from Long Beach and Linda Preuss from Santa Monica, enjoy the camaraderie with other bakers at the Saturday meet-ups with L.A. Bread Bakers.

“It’s working out in terms of a community gathering place,” Firemaster Paul Morgan said. “The oven and the fire and the bread — all of those things were always community and family gathering places. You come around the fire, you come to the oven, to not only get warm but to be fed, to get nourished.”

Wheat was brought to California from Mexico and was first grown by padres during the mission period and later by settlers, according to research from University of California Davis.

Until the second half of the 19th century, wheat was produced on a relatively small scale in California, but that changed with the Gold Rush and the demand for more food.

By 1888, wheat was harvested on 3 million acres, mainly located in the Central Valley, according to the research. With a production of 42 million bushels, California ranked second in the nation in wheat production.

However, largely because of soil exhaustion and low farm prices, the wheat boom came to an abrupt end, and by 1913, wheat was being grown on only 380,000 acres.

Morgan said a group of Los Angeles residents banded together over the past decade to bring wheat back to the area. Group members felt the city lacked high-quality, locally sourced bread, and it was time to bring it back.

The group knew that they needed farmers to grow the wheat, millers to process the crop and bakers who believed in the group’s mission.

“It was the nature of a small community to have that triad of grower, miller, baker, which didn’t look like it was logical or easy to recreate in this huge urban [setting],” Morgan said. “All those ideas of trying to get back to the land, it’s tough when you have 7 million people and a huge infrastructure that seems to be based on General Motors cars.”

However, over the past decade, the group persuaded a few farmers to grow wheat, and a mill opened in Pasadena, Grist & Toll. And the Los Angeles Bread Bakers group was formed and started offering classes.

The next goal: a community oven in West L.A. 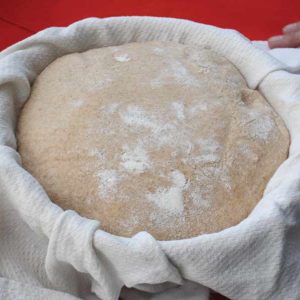 Paul and Dana Morgan, a master gardener and event organizer for the L.A. Bread Bakers, were talking with the Rev. Peter Rood of Holy Nativity Episcopal Church, who mentioned he would like to get into cooking and baking.

The Morgans told him about the need for a community oven, and quickly, Rood suggested building the oven on the church grounds.

Rood said the oven was an easy sell for him because he knew the positive impact it would have in bringing people together.

Along with the community oven, Holy Nativity is also home to 4,500 square feet of edible landscaping, including a community garden. Much of the food grown is donated to a local food pantry.

On Saturdays, before the L.A. Bread Bakers start loading the oven with bread, many of them first bake pizzas, often using herbs from the church’s garden for ingredients.

“Even in spite of our differences, I think there’s something wonderful that happens when we can still sit at table, like we do here, even with people that are vasty different than we are and maybe worship a different god, but still love pizza together,” Rood said.

Wendy Temple, who joined the bread bakers meetup group about three years ago, drives from Del Rey to the oven in Westchester. The group is home to members from all over L.A., with some driving as far as Pasadena or Long Beach to join the monthly bake. It is appealing to families, eager to teach young children how bread is made.

Temple said although she is part of several other local gardening and local food organizations, she enjoys the L.A. Bread Bakers group the most because she not only learns an incredible amount but also because of the friendships she has formed.

“It’s such a great community event — great people,” Temple said. “Every time, I learn something from somebody because everybody is always experimenting with flours, with hydrations, with percentages, things that are chemistry, way above my head. Such an interesting [group of] informed, fun, bread-producing people.”

Drago at the Petersen