The Los Angeles County Board of Supervisors voted on Sept, 5 to permanently maintain the rainbow colors on the Brooks Avenue lifeguard tower on Venice Beach which were painted last June as a part of “Venice Pride.” 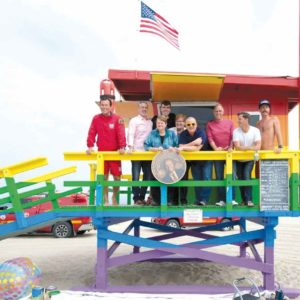 The lifeguard tower was painted in rainbow colors and a section of Venice Beach was renamed as a memorial to the late Los Angeles Councilman Bill Rosendahl, 11th District, the first openly gay person to serve on the Los Angeles City Council.

The rainbow lifeguard tower was originally expected to be temporary, but over the summer, it became a local landmark and popular symbol of inclusion, individuality, and diversity, said Supervisor Sheila Kuehl, 3rd District.

“At a moment when human rights for many communities in this country are under threat, this dramatic artistic and political statement on Venice Beach offers people in Los Angeles a clear statement of inclusion,” Kuehl said. “In recent weeks, thousands of people voiced their hope that the lifeguard tower would be preserved as it is forever. That’s a very moving testament to how far Los Angeles has come toward achieving LGBT equality.”