The High Holy Days, including Rosh Hashanah and Yom Kippur, are the holiest time of the year for Jews, marking a period of celebration, reflection and atonement.

Beverly Hills Temple of the Arts is observing the High Holy Days with traditional prayers and services, as well as special programming adding meaning and context. The temple owns and holds services in the historic Saban Theatre in Beverly Hills, and Rabbi David Baron invites everyone to join the congregation for High Holy Days observances. 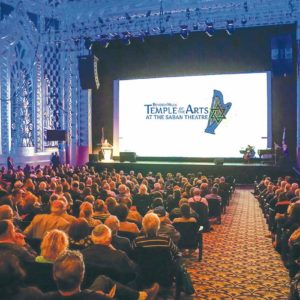 “It’s our 25th year,” said Baron, who founded Beverly Hills Temple of the Arts in 1992. “We wanted to create an environment that welcomed people and explained religion through art, music and film. It was a different approach. It was really about the arts. It keeps people’s interest and makes them more aware and curious about what they are experiencing.”

Baron said the congregation primarily comprises performing artists and people in the entertainment industry who live throughout the Los Angeles area. The temple specializes in Judaic teachings augmented by music, film, discussions and forums.

Baron said Rosh Hashanah – also known as the Jewish New Year – is a time of celebration marked by the sounding of a shofar, or ram’s horn.

“We are thankful to God for a year of life,” Baron said. “It’s the beginning of a new year, and the beginning 10 days of reflecting on life.”

The High Holy Days conclude with Yom Kippur, or the Day of Atonement.

“It’s a time to reflect on our lives and any conflicts so we can try to forgive and heal,” Baron said. “We recite prayers. It’s a day of atonement. We reach out to create a reconciliation.”

Beverly Hills Temple of the Arts will welcome Father Eamon Kelly, a Catholic priest from Ireland, to the Yom Kippur services for a discussion on his work near the Sea of Galilee in Israel. Kelly and his congregation built a retreat near the site in Israel and uncovered an intact, first-century synagogue. Also discovered was the Magdala Stone, which has an inscription of a menorah that is the oldest Jewish symbol known to exist, Baron said. Kelly will bring a replica of the Magdala Stone to the temple.

Following Yom Kippur services on Sept. 30, Beverly Hills Temple of the Arts will show “Azimuth,” a film about an Israeli soldier and Egyptian soldier who encounter each other in the desert at the end of the Six Day War in 1967, and another film about David Ben-Gurion, Israel’s first prime minister.

Baron said there is still space available for High Holy Days observances at the 1,800-seat Saban Theatre, an art deco landmark that the temple also leases for concerts and other events. High Holy Days tickets start at $400. Young adult memberships, which include admission to the observances, are $150 for newcomers ages 20 to 35.

The temple’s Yom Kippur services are broadcast worldwide on cable television networks and live-streamed on jltv.tv and bhtota.org. Last year, 330,000 people around the world viewed the services, Baron said.

Beverly Hills Temple of the Arts’ Saban Theatre is located at 8440 Wilshire Blvd. For information, call (323)658-9100, or visit templeofthearts.org.