Beverly Hills will commemorate the 16th anniversary of the 9/11 terrorist attacks this Monday with ceremonies hosted by the police and fire departments.

The morning ceremony, including a moment of silence and a bell-ringing, will begin at 6:45 a.m. in front of Fire Station 1, at 445 N. Rexford Drive. An evening ceremony will take place at 5:30 p.m. at the station, and will include a laying of a wreath, honor guard and ringing of the bell. The fire and police chiefs will each make short presentations. 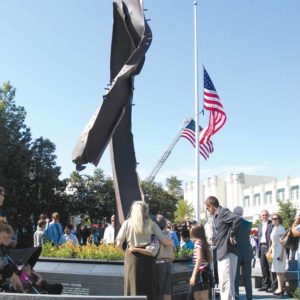 The city of Beverly Hills remembered 9/11 on its 10th anniversary in 2011. (photo by Aaron Blevins)

“As with so many historic events in our nation’s history, the tragic events that took place in our country on Sept. 11, 2001, make it a day we shall never forget,” said Mike Hand, acting deputy fire chief, in a staff report to the city council. “The 9/11 garden was created in 2011 and is open to the public on a daily basis to provide a sanctuary for those who wish to sit, contemplate, and remember the events of that day.”

The garden, holding a 30-foot-tall beam from the wreckage of the World Trade Center, is located on the station’s grounds.

The late Brad Burlingame, whose brother was the pilot of the hijacked American Airlines Flight 77 that crashed into the Pentagon, was the president and CEO of the West Hollywood Marketing & Visitors Bureau. At a previous anniversary remembrance, he donated a piece of Flight 77 and his brother’s gold Navy aviator wings to a vault underneath the memorial.

The rent is due in Beverly Hills