‘Battle of the Sexes’ serves up great cultural commentary

Directors Jonathan Dayton and Valerie Faris started working on “Battle of the Sexes” in 2015, before the primaries for the 2016 presidential election.

They thought it was likely that America would see Hillary Clinton run against a male Republican candidate, and thus knew their film would be topical. How topical, they couldn’t have imagined. 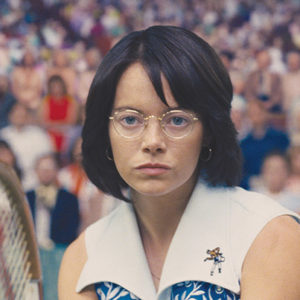 “We had no idea the world we’d be living in when we released the film, but I think this topic is never going to not be topical,” Faris said during a live Facebook discussion hosted by Refinery29.

“Battle of the Sexes” follows tennis legend Billie Jean King, played by Emma Stone, as she leads the charge for higher pay for female tennis players. King helps form the Women’s Tennis Association in an attempt to equal the playing field when it comes to pay.

In the midst of the Virginia Slims Tour — which allowed for the first time women to set their financial terms — King is challenged by tennis champ Bobby Riggs, played by Steve Carell. Their actual 1973 match, billed as the “Battle of the Sexes,” was one of the most watched televised sports events of all time, reaching 90 million viewers around the world, according to the film’s production notes.

A year after her match with Riggs, King founded the Women’s Sports Foundation, which has found, through decades of research, that female athletes continue to be paid less, face higher levels of discrimination and receive significantly less media attention than male athletes.

“Today we’re still having too many of the same discussions,” King said in the film’s production notes. “White women still make 78 cents on the dollar, African American women 64, Hispanic and Native American women are at 54. We don’t have a Congress of even 20 percent women. We have few women CEOs… I hope the story of this match will continue the dialogue, will bring people together and remind us to think before discounting others for any reason. The things we fought for in 1973 I’m still fighting for and we’ve got to keep pushing.”

King has also been an outspoken advocate for LGBT equality, although it wasn’t a role she immediately assumed in the 1970s.

Rather, King was outed when her former partner, Marilyn Barnett, sued her for palimony. This cost King thousands of dollars in legal fees, endorsements and lost opportunities.

King, who was 37 when outed, told NBC News in a recent interview that it took her almost 15 years to come to terms with who she was.

That struggle is the larger focus of “Battle of the Sexes.” Early on in the film, it’s clear that King has fallen for Marilyn, a hairdresser she meets shortly before the Virginia Slims Tour begins.

“Battle of the Sexes” has faced criticism for sugarcoating King’s relationship with Barnett. The lawsuit and public outing are not covered in the film. Rather, their relationship plays out over 121 minutes flirting, intense eye contact and private moments shared in hotel rooms.

Stone delivers an incredible performance, giving the audience an intimate perspective on how much King struggled in the moments leading up to the match with Riggs.

Although this film is only a glimpse into that struggle, “Battles of the Sexes” will introduce thousands of millennials and Gen Zers to an incredible LGBT advocate — someone who has truly had to fight for everything she has.

Regardless of the film’s approach to her story, King deserves to be remembered.

Wolf: For a howling good time