The attorney of a local political donor wants West Hollywood Councilwoman Lindsey Horvath investigated by a grand jury to determine whether she violated conduct rules when she spoke out about the overdose death of a 26-year-old man.

Gemmel Moore died July 27 of a methamphetamine overdose at the home of Ed Buck, a well-known donor in local and LGBT political circles, in the 1200 block of North Laurel Avenue.

Buck’s attorney Seymour Amster said Horvath should have disclosed that Buck “actively opposed” her campaign when she spoke during an Aug. 21 city council meeting about Gemmel Moore’s death. 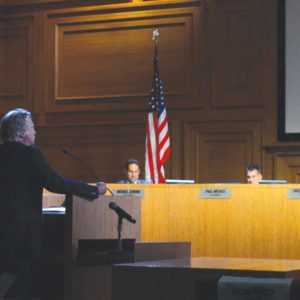 Initially, an investigation by the Los Angeles County Sheriff’s Department revealed no suspicions of foul play, and the cause of death was determined to be an accidental overdose.

However, after local media reported Moore’s family’s concerns about circumstances surrounding his death, the sheriff’s department’s homicide bureau assigned investigators to review the case to determine whether there is any criminal culpability.

In a letter sent Monday, Sept. 18, Amster outlines why he believes Horvath should be investigated, and he further explained his argument during public comment at Monday night’s West Hollywood City Council meeting.

“We are asking that she disclose all of her financial records, her email records on her personal servers, as well as her telephonic records to determine if she has been involved in instigating, promoting or financing the character attacks on Mr. Buck,” Amster said.

Horvath declined to respond to Amster’s claims, saying she only wants to focus attention on ensuring that the justice system works fairly for all. Horvath previously contacted the sheriff’s department, along with the Los Angeles County District Attorney’s office, to voice her concerns.

“Again, for me, this is about making sure that investigations are conducted thoroughly and without prejudice,” Horvath said. “I made the comments I did because Gemmel Moore’s family and the community want answers, and I believe our justice system is supposed to deliver those answers. That’s all I’m looking for, and that’s all I’ve been focused on in any of my comments.”

Moore’s family and local social justice advocates have spoken out about racism in the criminal justice system, arguing that law enforcement didn’t initially investigate Moore’s death because he was a black male escort, and Buck is a wealthy, white man.

In early September, the district attorney’s office agreed to grant limited immunity to at least four people who said they had information relevant to Moore’s death but feared prosecution because of their previous sex work and drug use.

Amster said he wouldn’t comment on whether Buck used meth or anything that happened inside the apartment.

When Buck invited Moore into his home, it was to provide a safe place for Moore to escape homelessness, Amster said.

“What is lost over this whole thing, no matter how we want to twist this, Ed is grieving, and I think it bothers Ed more than anything that he’s not allowed to grieve properly,” Amster said.

The sheriff’s department investigation into Moore’s death is ongoing.