Angels Flight reopens after closing in 2013

Four days after reopening to the public, Angels Flight, an incline railway in downtown, is closed for “several days” of maintenance. 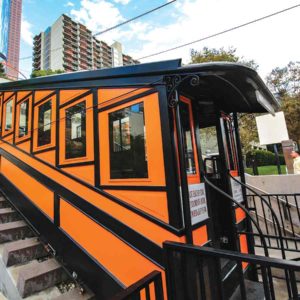 Mayor Eric Garcetti was among the participants for the first ride at the Aug. 31 reopening.

The railway will operate from 6:45 a.m. to 10 p.m. daily, including holidays, once it resumes service. The 116-year-old railway takes passengers on a short ride between Hill Street and Grand Avenue on Bunker Hill. It closed temporarily in 2013, but earlier this year the California Public Utilities Commission certified a plan to upgrade Angels Flight to meet the highest safety standards. Commission staff approved the reopening last month.

The funicular’s top station is at California Plaza, 350 S. Grand Ave., and its lower station is at 351 S. Hill St., across from Grand Central Market. One-way fare is $1. Metro pass holders can ride for 50 cents. For information, visit angelsflight.org.

Give clothing for LGBTQ homeless youth