The cities of Los Angeles and Beverly Hills were among those throughout the state to honor the victims of the 9/11 terrorist attacks on Monday, the 16th anniversary of the attacks. 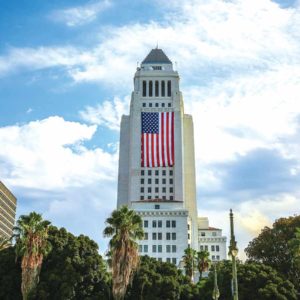 An American flag was draped on the side of Los Angeles City Hall to commemorate the 16th anniversary of the 9/11 terrorist attacks in New York, Washington, D.C. and Pennsylvania. (photo courtesy of the Los Angeles mayor’s office)

Los Angeles City Hall had an American flag draped over one of its walls, and Beverly Hills fire and police personnel held morning and evening ceremonies.

“Each of us are connected soul to soul, heart to heart, by a tragic day that changed the very fiber of our being,” Beverly Hills Mayor Lili Bosse said in an Instagram post. “We will never forget.”