The Original Farmers Market opened at Third and Fairfax in 1934, paving the way for newer, smaller markets that allow farmers from all over the state to sell their harvests throughout the city. Plenty of restauranteurs also rely on local markets to purchase fresh, natural ingredients straight from the farm to enliven their menus.

The Hollywood Farmers Market is one of the larger farmers markets in the area, with approximately 200 vendors setting up shop during the peak summer season. 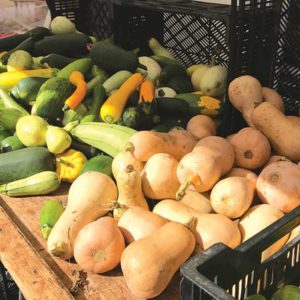 For some of them, the market is an outlet for their entrepreneurial spirit. Some of them start out making foods such as hot sauce, jelly, honey or bread in their own homes before hitting the farmers market circuit.

“This market has been a place for them to actualize that dream,” said Ariell Ilunga, the market’s co-manager.

The farmers lined up along Ivar Avenue sell a wide array of fruit and vegetables, and vendors along Selma sell various prepared foods.

The market is run by the nonprofit SEE-LA, which helps build sustainable food systems for the area’s low- to moderate-income residents.

“Essentially it has been a bright light in this community,” Ilunga said.

The Hollywood Farmers’ Market is located along Selma and Ivar avenues in Hollywood – between Sunset and Hollywood boulevards, and Vine Street and Cahuenga Boulevard. It’s open from 8 a.m. to 1 p.m. every Sunday.

The Helen Albert Certified Farmers’ Market is located in Plummer Park’s north parking lot. It has served residents for more than 30 years, about as long as West Hollywood has been a city. 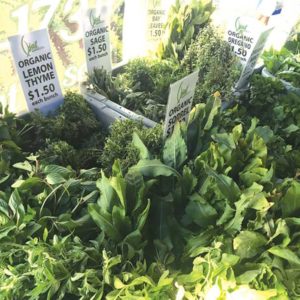 A few of the market’s vendors, such as West Coast Seafood, have been selling their wares at the market each Monday from the beginning. Peter Siracusa, whose father started the business in 1979 after relocating to Southern California from Chicago, has been a regular fixture at the company’s farmers market booths in the area.

Harry’s Berries is another West Hollywood market mainstay, and a regular presence at markets throughout the county. While not USDA certified organic because of the costs and bureaucracy involved, the company’s products are still free of synthetic chemicals and grown with a commitment to stewardship of the land.

Harry’s is best known for its strawberries, but, as they begin to go out of season, beans, tomatoes, salsas and other products are also for sale at its booths.

The Helen Albert Certified Farmers’ Market in West Hollywood is located at 1200 N. Vista St. It’s open every Monday from 9 a.m. to 2 p.m., including most holidays. 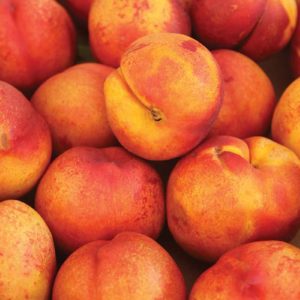 With attractions including a petting zoo and live music every week, the market tries to go above and beyond the typical farmers market experience.

“We want families here, we want the kids here,” Dunlap said. For the kids especially, she added, it’s important to instill the mindset that “you always visit the farmers market every Sunday.”

A pie bake and pickling contest are two of the events the Beverly Hills market hosts to engage local residents beyond the normal shopping experience. The market also attracts plenty of people from outside Beverly Hills – about 50 percent, according to some survey data Dunlap compiled. Vendors come from San Diego, Fresno and everywhere in between.

The Beverly Hills Farmers’ Market is located along the 9300 block of Civic Center Drive. It’s open from 9 a.m. to 1 p.m. every Sunday.