Like many new California residents, Ronald Sasiela decided upon his arrival in the Golden State four years ago to reinvent himself.

Along with taking acting classes and joining a senior acting group, the 74-year-old Maryland native tried his hand in the kitchen, namely in pickle making. 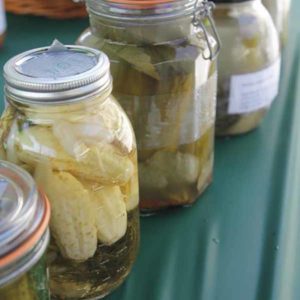 A frequent visitor of the Beverly Hills Farmers Market, Sasiela grew interested in pickles when he learned about the Beverly Hills PickleFest contest four years ago. A retired chemist who worked often with the food industry, Sasiela wasn’t intimidated to try new things in the kitchen. Plus, the PickleFest sounded fun.

But until 2017, he had only placed second or third in the contest. Sasiela wasn’t sour, but he was ready for a pickle victory.

“That might be interesting,” Sasiela thought. “Let’s give that a whirl.”

But Sasiela’s sowing the seeds to victory didn’t stop there. He needed to step up his recipe game too.

“I changed the recipe quite a bit,” Sasiela said. “I jacked up the dill content, and added quite a bit more of the fresh dill weed – I tripled it to make it very strong – and jacked up some of the seasonings.”

And much to Sasiela’s amazement, his efforts paid off.

As the reigning pickle champ, Sasiela credits persistence to winning first place at the 2017 Beverly Hills PickleFest in the dill pickle category, along with some credit given to the uniqueness of his white recipe.

After the contest, PickleFest attendees approached Sasiela to try out his winning pickles.

“They said, ‘Wow, I can see why you won,’” Sasiela said. “That was very gratifying. I didn’t expect that.”

Today, Sasiela is grateful for his newfound hobby. On a trip to the East Coast to visit his daughter, the family made pickles together and later enjoyed them at a picnic. 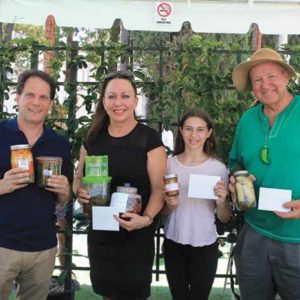 Sasiela uses a canning technique, known as a hot pack method, which involves boiling the food before canning it. He finds his ingredients at local farmers markets, which helps ensure everything is fresh, high quality and full of flavor. Once he buys the cucumbers, he makes pickles within a few days.

“I’m sure they’re probably good for a week or so, but if you’re committed to it, you should do it quickly,” Sasiela said. “I can’t help but think the fresher the pickles are, the better it will turn out.”

In the beginning, Sasiela made pickles that weren’t quite as flavorful as hoped, but he encourages new pickle-makers not to get frustrated.

“You’ll end up maybe making stuff, and worse comes to worst, you maybe rinse it off, and turn it into relish,” he said.

His advice to new pickle-makers? Find a good recipe online and go for it.

When he started his career as a chemist, Sasiela’s initial studies were in nuclear engineering. Learning how to make pickles was far simpler.