Mayor Eric Garcetti and city council members welcomed Thomas Bach, president of the International Olympic Committee, to City Hall in celebration of a vote last week to bring the Olympics back to Los Angeles in 2028. 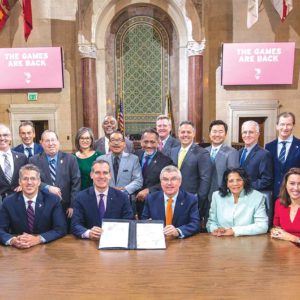 Bach and Garcetti signed the host city contract in Peru. The unanimous vote by the IOC also confirmed that Paris will host the 2024 Summer Olympic and Paralympic Games. Paris and Los Angeles were both bidding for 2024 before an unprecedented deal that awarded two future hosts simultaneously.

In the beginning of the bidding process, Boston was the United States Olympic Committee’s preferred U.S. candidate. Two years later, Los Angeles and Paris were the two cities left standing. They will both join London as the only cities to have hosted three Olympic Games.