On Hollywood Boulevard, just outside Hard Rock Cafe, there’s a man dancing to the rock music the restaurant plays for guests.

Nearby, a sidewalk vendor has a table full of fidget spinners. Later in the evening, a row of hotdog vendors grills food openly, the smell of bacon wafting through the air.

A hip-hop group freestyle raps about individual tourists as they walk by, gathering a crowd of onlookers who record them on their cell phones. 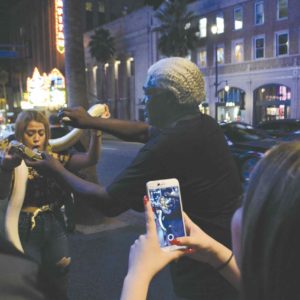 Azucena Favela, an 18-year-old Simi Valley resident, stopped with friends on Tuesday evening to take a photo wrapped in boa constrictors. Ronald Johnson, a longtime snake owner, has been coming to the Hollywood and Highland area for about two years. (photo by Jaclyn Cosgrove)

On the sidewalks of Hollywood Boulevard, there’s something for everyone — and for local business leaders, that’s a problem.

In February, the Los Angeles City Council voted to unanimously decriminalize sidewalk and street vending, which was until then a misdemeanor.

Upon the council’s vote, Mayor Eric Garcetti praised the move and said he looked forward to working with the council on a comprehensive, compassionate policy.

However, months later, business owners are still waiting for the council’s next steps. Those near Hollywood and Highland are clamoring for change.

“The city of L.A. has not finished drafting the Street Vending ordinance,” Kerry Morrison, executive director of the Hollywood Property Owners Alliance, wrote in a Facebook post in late August, trying to drum up attention about street vending. “… As [leaders] drag their heels, Hollywood’s pedestrian experience is being dragged into the abyss. This is an embarrassment that the millions of tourists who come to see Hollywood have to see this.”

Tony Arranaga, communications director for Los Angeles Councilman Mitch O’Farrell, 13th District, whose district includes the area around Hollywood and Highland, said in a statement O’Farrell is eager to see progress on a citywide ordinance regulating vending in public spaces.

“The item is pending discussion in both Economic Development and Public Works and Gang Reduction Committees,”  Arranaga said. “The Councilmember wants to establish rules and guidelines that protect vendors while meeting the needs of the community. Regulating sales on public property is a complex issue, and the Councilmember is sensitive to all angles of this policy.”

The complexities of street vending play out each day on Hollywood Boulevard. The people who gather along near the Hollywood and Highland intersection to sell goods and panhandle tourists represent many of the issues that plague Los Angeles: homelessness, drug addiction, immigration and the struggling middle class.

People like Anthony Garcia and his wife, Gloria, said they’re trying to make extra money to pay rent and the bills.

The couple regularly drives from the San Fernando Valley to sell bottled water for $1 on the sidewalk.

Anthony Garcia worked in a warehouse until he was laid off a few months ago. The summer has been slow for warehouse jobs, he said.

Gloria Garcia was working as a stylist but struggled to build a consistent clientele. People seemed to be spending less money on haircuts, she said.

Their family is helping pay some bills, but the $40 they make each day selling water is worth the drive, he said. On Labor Day, they were told to leave by law enforcement, he said.

“I’d be happy to get a permit if they want, no problem,” Garcia said. “I’ll go through the steps if they need that done and do everything legally.”

A few Walk of Fame stars down from the Garcias, past Spider Man impersonators and a Freddy Krueger impersonator clicking his finger blades at passersby, Ronald Johnson can often be found with his three snakes – a group of boa constrictors and pythons named Butterfly, Slick Rick and James. Johnson takes donations from people who want to take photos with the snakes.

Johnson started coming to Hollywood Boulevard about two years ago, but he said Tuesday was his last night on the street. He’s frustrated by inconsistent enforcement and what he sees as unfair treatment for people trying to make a living, he said.

“People are trying to make money, like everybody else,” Johnson said. “If they can make money selling art, they’re supporting their families. Times are hard now. If a person makes a few $20 or $30, it’s a matter of eating and not eating in a day. When you’re running people away, they can’t eat. The mayor is talking about, it’s OK for people to vend, but you got a few of the rich people that don’t want nobody to make no money.”

Near Hollywood and Highland, beyond the sidewalk vendors, is a barrage of neon lights and flashy architecture of the brick-and-mortar businesses, also full of people trying to make a living.

At any given time, there are usually three to seven street vendors stationed outside the Ripley’s Believe It Or Not Hollywood location.

Ripley’s general manager Cory Dacy said for him, the biggest issue is not with the sidewalk vendors but with people who are homeless and suffering from untreated mental illnesses and substance use disorders.

“It’s a double-edged sword,” Dacy said. “When there are seven of them outside of your business, it doesn’t make you look like the place to go to, but they’re better than the line of sleeping homeless people that they’ve replaced.”

Plus, when a potential customer is asked for money from a homeless person, it can have a psychological impact on whether they will come into a tourist attraction and spend money on a ticket, Dacy said.

Dacy is among several area business owners who would like to see the City Council pass a licensing requirement for sidewalk vendors.

However, he said he hopes that wouldn’t be a barrier to the undocumented immigrants who work hard to make a living as street vendors.

“They are absolutely the best participants in the group,” Dacy said. “They are the people that treat their business as an owner would. They clean up after themselves, and they’re friendly to us, and they let us know when trouble is coming. However, that is the one population that seems to be affected the most.”

Michael Nazzal, a property manager who oversees several businesses at the southwest corner of Hollywood and Highland, said regulations for sidewalk vending are imperative to the success of the area. Nazzal has worked in the area for 15 years, and said the abundance of sidewalk vendors has grown into essentially an impromptu flea market on Hollywood Boulevard.

The vendors can sell water and food at lower prices than the brick-and-mortar businesses, undercutting the sales of small business owners who pay for permits, taxes and other overhead.

“It’s just ridiculous, and I blame the mayor and the ACLU for passing rules that allow these people to be on the boulevard and in this area and for tying the police’s hands, not allowing them to do anything about it,” Nazzal said. “Five years ago, or even almost 10 years ago, the issue was the people in the costumes. Now, those seem like the least of the problem.”

Nazzal grew up in L.A. and takes pride in people visiting the city, he said.

Millions of people visit Hollywood each year, and the growing number of people experiencing homelessness panhandling in the area and the sidewalk vendors give tourists a negative impression of L.A., he said.

“It says something about our city if we can’t get people to clean up the area,” Nazzal said.

Nazzal said he wants to see the city require permits, limit the number of street vendors who can work on a block and then aggressively enforce those regulations.

“Enforce it with not just citations, but misdemeanor fines if they’re repeat offenders,” Nazzal said. “Clean up the boulevard. They don’t allow this at the Santa Monica Promenade, and they’ve regulated it at the Venice Boardwalk.”

One of the holdups for the City Council could be working through how to regulate such a diverse industry.

Los Angeles County has already developed stringent health codes for food vending, but the frustration from the business owners comes when they’re not consistently being enforced for sidewalk vendors, he said.

If the City Council were to require sidewalk vendors to meet requirements similar to those that food trucks must meet, it would likely mean thousands of dollars in startup costs, he said.

A $10,000 food cart that meets commercial food regulations would be a significant barrier, especially for many of the sidewalk vendors who are not inherently trying to break the law, he said.

“It’s really sad to call these guys ‘illegal vendors,’” Geller said. “A lot of these guys are working really hard, and the pathway to being legal is fraught with costs, and a lot of intimidation… A lot of them are amazing chefs that care about their customers, that make incredible food, that are doing everything they can do… They just don’t know how to become legal.”

Until the Los Angeles City Council acts, frustration among sidewalk vendors and local businesses will likely only grow.

Vendors and business owners near Hollywood and Highland have said law enforcement have been patrolling the area more frequently, telling vendors they have to leave. On Tuesday afternoon, many of the vendors typically selling goods along Hollywood Boulevard had been scared away by an early morning visit from police.

By that evening, though, some vendors had returned to their usual spots, selling their products to anyone whose attention they could catch.

Pull up a lawn chair on Park(ing) Day