WeHo Pedals is cruising right along

Over the past year, cyclists have used the West Hollywood bike sharing program to collectively travel more than 20,000 miles – the equivalent of more than three roundtrips to New York City.

Since the program launched in August, WeHo Pedals riders have taken almost 14,000 trips around West Hollywood and beyond.

Recently, following many requests from bike share users, two WeHo Pedals stations were installed at The Grove, near the Original Farmers Market, allowing riders to travel outside of West Hollywood to the popular location. 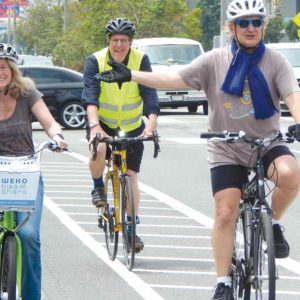 In its first month, the program saw 801 rides taken. A year later, more than double that number of rides, 1,776, have already been taken in August.

“We’ve got this great group of core riders, and it continues to grow,” Siegl said. “And it has been a really good alternative to being stuck in traffic.”

Currently, WeHo Pedals users can bike to Santa Monica or Beverly Hills, and they can leave their bikes locked in those programs’ racks. However, if they leave West Hollywood bikes in Santa Monica, they face a fee.”

Siegl said the next step will be to ensure the cities’ systems are interoperable, and riders can leave bikes without facing a fee.

Additionally, UCLA is in the process of installing a bike sharing program that will be compatible with West Hollywood, Beverly Hills and Santa Monica, Siegl said.

Using WeHo Pedals ranges in cost. People who want to use the pay-as-you-go option will pay $7 an hour. However, the program offers a $25 monthly plan and a $99 yearly plan, along with a discounted plan for students and an income-based plan for low-income households.

Siegl said overall, WeHo Pedals has been a great investment and helped several residents enjoy the city in a new way.

“We’ve noticed there are some folks who ride up and down every street, which looks like it’s exercise, and that’s a great option for people to have a fun way to get around and not have to get in their car for those local trips, and get some exercise while they’re at it,” Siegl said.