After nearly eight years, the Los Angeles Zoo has welcomed a California sea lion back to its Sea Life Cliffs habitat. 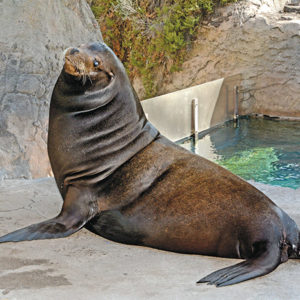 Visitors will be greeted by the boisterous barking of a nearly 700-pound male California sea lion named Buddy, whose vocalization is so loud it can be heard echoing throughout the park. The blind adult male sea lion, estimated to be approximately 10 years old, arrived at the L.A. Zoo on May 24 after being rescued and rehabilitated by the Marine Mammal Care Center Los Angeles (MMCC LA).

“Buddy has definitely brought a new sense of excitement to Sea Life Cliffs,” said Jennifer Kuypers, senior animal keeper at the Los Angeles Zoo. “Being from the wild, he came to us without any trained behaviors. As we work with him, we’re learning about him as an individual. Buddy is a confident, smart sea lion who is adapting well to his new environment.”

Buddy was found in a populated area of Manhattan Beach. The animal was malnourished and emaciated. Due to blindness, he was unable to hunt, forage and defend himself. He was rescued on July 15, 2016, and brought to the MMCC LA, where the veterinary and husbandry staff fed Buddy and he started gaining weight. He remained at the MMCC LA for nearly 10 months until it was time to find him a permanent home.

“This California sea lion was deemed non-releasable due to his injuries and blindness,” said Jeff Cozad, executive director of MMCC LA. “That’s when the Los Angeles Zoo stepped in. They felt our patient would enhance their Sea Life Cliffs exhibit and found him to be a perfect fit. We couldn’t be happier that he was placed locally where MMCC LA visitors and volunteers can still visit him often.”

Buddy has quickly settled into his new home at Sea Life Cliffs, bonding with the animal care staff and getting to know his new neighbors, a Pacific harbor seal named Ziggy and two Atlantic harbor seals named Mysty and Alfred. It’s common in zoos for sea lions and harbor seals to be housed in the same habitat because they share the same environment in the wild. But, unlike harbor seals, sea lions tend to be more active and vocal. Buddy is faster, more mobile and communicates through a series of vocalizations including barks, growls and grunts, which have different meanings ranging from excitement to aggression.

Buddy is the second animal the zoo has welcomed to Sea Life Cliffs in the last year after it was rescued off the coast of Southern California. Ziggy, an 18-month old female Pacific harbor seal, made her home at the zoo on Nov. 1, 2016. The zoo plans to bring in additional California sea lions to add to the group in the near future.