‘Treasure trove’ continues to be found under Purple Line

While the Purple Line Extension project currently being built under Wilshire Boulevard represents the future of transportation in Los Angeles, the construction also provides a window into the past.

Crews are unearthing a “treasure trove” of fossils from animals and plants that existed in the area 10,000 to 100,000 years ago. So far, the digging has reached depths of approximately 45 feet, on track to a final depth of 60 to 80 feet.

The Los Angeles County Metropolitan Transportation Authority (Metro) has contracted with Cogstone Resource Management and paleontologist Dr. Ashley Leger to work side-by-side with crews to recover fossils from the soil. Crews carefully examine the dirt before it is hauled away, and Leger is notified any time fossils are found. 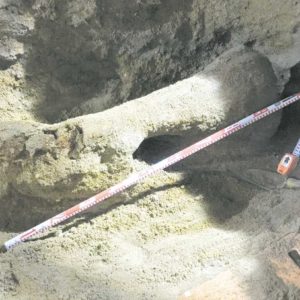 Crews discovered a limb bone from a mammoth earlier this year during excavation for the Purple Line Extension subway project. (photo courtesy of Metro)

The mammoth skull has been taken to the La Brea Tar Pits and Museum, where visitors can see it being cleaned and analyzed in a laboratory. The work typically occurs on weekends, Leger said. Scientists are currently working on one side of the skull; it will be flipped over in September for work to begin on the other side.

Since the fossils from the mammoth and mastodon were discovered, smaller fossils have been discovered from a Pleistocene Era camel and rabbit. Near the excavation site for the subway station near Wilshire Boulevard and Fairfax Avenue, crews have found bison and turtle fossils. The smaller animals of the period were similar to their descendants today. Although the fossils are small, Leger said the discoveries help scientists learn about conditions and inhabitants of the area tens-of-thousands of years ago.

“It’s giving us an amazing look at the sub-surface of L.A.,” Leger said. “This is a great opportunity for a paleontologist.”

Leger works at sites along the Purple Line Extension five-days-a-week and is on 24-hour call so she can arrive quickly whenever new fossils are found. She said the next discovery could be just around the corner.

“I eat, sleep and breathe the Purple Line. Right now, they are continuously working on the La Brea and Fairfax stations, and they are about to start the La Cienega station,” Leger said. “They watch the sections being removed and as soon as they find something, they call me and I go down to assist.”

Leger said only 1 percent of animal bones become fossils, so finding the mammoth and mastodon bones and fossils from other creatures is significant. The location near Wilshire Boulevard and La Brea Avenue is believed to have been sandy and contained a moist, pond-like environment when the animals died. Farther west near the Wilshire/Fairfax station, the soil is permeated with the “asphaltic” tar that is found at the nearby La Brea Tar Pits.

All of the fossils are being handed over to the Los Angeles County Museum of Natural History (NHM). The mammoth and mastodon bones will eventually be taken to the museum near Exposition Park after being processed at the La Brea Tar Pits and Museum, which is operated by NHM. All fossils from the “asphaltic” area being excavated near the Wilshire Fairfax station will be housed at the Tar Pits.

Leger said the recent fossil discoveries may be the tip of the iceberg, and she is excited about what the future may bring. They may provide scientists with answers about why some animals became extinct and others survived, as well as how climate change and other factors affect animals and the environment

“It’s pretty well in full swing. They have been working at Fairfax consistently for a couple of months. Excavation is still ongoing at La Brea,” Leger said. “We are eager to see what they are finding.”