The Los Angeles City Council recently approved funding for a traffic study around a proposed housing and retail project at the site of a former Sears department store on Santa Monica Boulevard in Hollywood.

The council voted to allocate $190,000 for the Los Angeles Department of Transportation to hire a consultant and conduct the study, which will examine traffic patterns in the area surrounding the development and identify potential impacts and ways to mitigate problems.

The project by CIM Group, located at a site stretching from 5601 to 5667 Santa Monica Blvd., has been years in the making. The Sears store closed in 2008 and remains vacant. Multiple smaller buildings located west of the former Sears store have been razed to make way for the development. 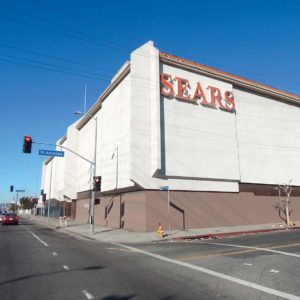 The project will include 437 residential units, including 62 affordable units, and 377,900 square feet of retail space, according to plans submitted to the Los Angeles Department of City Planning. The project will incorporate the iconic tower at the former Sears building. It is estimated to bring more than 1,000 jobs to Hollywood.

Councilman Mitch O’Farrell, 13th District, said he is optimistic the project will get under way soon, as it will help revitalize the neighborhood.

“[It] is a transformative project that will provide more housing, a large portion of it affordable, new amenities for the neighborhood and jobs to improve our local economy,” O’Farrell said. “It will revitalize a critical corridor and beautify Santa Monica Boulevard in this important part of East Hollywood.”

Requests for comment to CIM Group and the project manager were unanswered. The completion date for the study and the target date for the start of construction were not available. The project was approved nearly a decade ago and requires the developer to provide approximately $900,000 for improvements in the surrounding neighborhoods.

The project was initiated by Continental Development Group, which did not proceed with construction for many years. The property was sold to CIM Group in 2015.

The project was also the subject of a lawsuit filed in 2007 against the city by the La Mirada Avenue Neighborhood Association seeking to ensure that the money contributed by the developer would be spent in the surrounding community. Members of the group were concerned the city would use the money for other purposes. A settlement was reached in 2008 that mandated that the money be used for improvements in the local area benefitting residents who may be impacted by traffic increases. Traffic improvements could include speed bumps, crosswalks and new signals.

“Traffic is already horrendous in the area,” said Doug Haines, a member of the La Mirada Avenue Neighborhood Association. “It’s finally going forward and we are going to have a traffic consultant. It’s pre-paid because of the settlement. It think this is a really good result.”