The wide-ranging conversation included the state of education (Allen was a school board member in the Santa Monica-Malibu Unified School District) and the recreational marijuana businesses that will open throughout the state next year. He also commented on the “new, exciting relationship with the federal government” that has proven contentious for many of California’s elected officials. 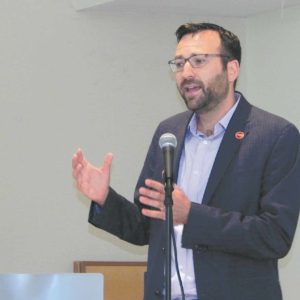 “We certainly, I think as a state, are in real disagreement with some of the things [President Donald J. Trump] says and does,” Allen said. “But I certainly don’t think California is about to secede.

“We are still in it together, institutions are strong,” he said.

Allen, elected in 2014, serves as chair of the Senate Education Committee and the Legislature’s Joint Committee on the Arts. He is a member of the Senate Committees on Elections and Constitutional Amendments, Natural Resources and Water, and Transportation and Housing.  He co-chairs the Environmental Caucus and is vice chair of the Jewish Caucus.