Rep. Adam Schiff joined a group of elected officials and residents at the Los Angeles Historic Park on Aug. 21 to support preservation of the San Gabriel Mountains.

President Donald J. Trump included the mountains in an executive order issued earlier this year calling for a review of national monument designations. [Secretary of the Interior Ryan Zinke gave his report to the White House on Aug. 24; media reports have said none of the national monuments under review will be eliminated, but some of their boundaries might be changed. It is so far unclear if the San Gabriel Mountains will be affected.]

“This, like everything else, we will resist,” said Schiff (D-Burbank), encouraging the type of grassroots opposition that contributed to the defeat of the Republican health care bill on the Senate floor last month. 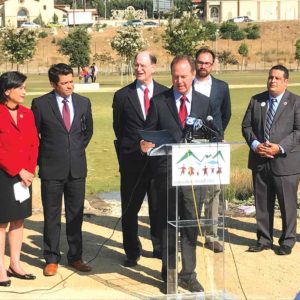 Trump’s secretary of the interior, Ryan Zinke, is scheduled to announce on Aug. 24 whether he will recommend changes to any of the more than 20 national monuments fitting that criteria – or whether any of their designations should be eliminated. The president cited potentially restrictive access to federal land that could “curtail economic growth” and designations that may not have received enough public vetting as reason for the review.

Schiff pointed to another possible motive.

“Our guess is simple,” the congressman said. “President Trump, in his zeal to be against anything President Obama did no matter what it is, is against this too.”

Environmental advocates have also been concerned that the Trump administration’s business interests will adversely affect open spaces and the plant and wildlife within them.

“Our fear of course, is that this administration is determined to sell off public lands, or auction off access to our great wilderness, beaches and woods from Alaska to California to developers, oil and gas prospectors, and other businesses,” Schiff said. “But we are here today to make clear that we will not go back.”

“We need bipartisan support from Congress to protect this area even more,” Chu said.

The San Gabriel Mountains have 600 archaeological sites with evidence of more than 8,000 years of human history, according to the U.S. Forest Service. The agency also says the mountains have some of the greatest biodiversity in the country. Visitors make millions of trips every year for hiking, hunting, skiing, horseback riding, nature watching and other outdoor activities.

Supporters of the mountains’ designation held several different signs during the Tuesday morning gathering – a few said “get your tiny hands off our national lands,” referring to the president and his alleged insecurity about his hand size, and another displayed a drawing of Smokey Bear with #Resist written on his hat.

“These fights are not won overnight,” Rep. Jimmy Gomez (D-Los Angeles) said. “They are won with each succeeding generation picking up the baton.”

The Los Angeles City Council passed a motion opposing Trump’s executive order shortly after it was issued. It accused the president of showing “reckless disregard for scientific research, environmental protection and historic preservation.”

Councilman Paul Koretz, 5th District, said “they’ll be drilling in the Grand Canyon” if national monument statuses are rescinded or shrunken. The Grand Canyon-Parashant National Monument, along the northern edge of the Grand Canyon, was also under review. It was then included on a list of six monuments that were removed from review.

“Since the monument was designated by President Obama in 2014, we have made great strides in improving the area, as well as improving access to it for millions of those living in park-poor communities,” Gomez said in a statement. “This is a time for progress, not going back.”