Last week, we took family visiting from out of town to Rock & Brews in El Segundo for lunch before enjoying a day at the beach. 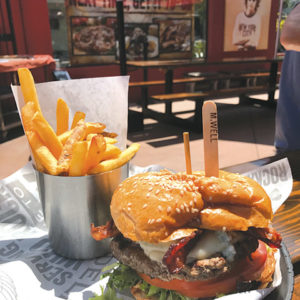 The concept behind Rock & Brews started in the summer of 2010 at a KISS concert. Dave Furano, a well-known rock ‘n roll concert promoter (Rolling Stones; Bob Dylan; Grateful Dead; The Doors; the Allman Brothers; George Harrison; and Crosby, Stills, Nash & Young), along with his brother Dell Furano (who at the time was serving as CEO of Live Nation Merchandising) brought their friend restaurateur/hotelier Michael Zislis backstage to meet their longtime friends KISS band members Gene Simmons and Paul Stanley. While sipping beers, Dave asked, “What’s better than rock and brews?” Before the beers were finished, the five of them collaborated on the Rock & Brews restaurant concept.

Zislis, a brewmaster, knows a thing or two about craft beer. In fact after graduating from USC, Zislis opened the Manhattan Beach Brewing Company. It was one of the first brewpubs in the South Bay. With its success, he helped in the urban revitalization in Manhattan Beach and built the area’s first and only luxury boutique hotel, Shade, in 2004. His second Shade Hotel in Redondo Beach opened in 2016.

The El Segundo location is their first restaurant. It opened in 2012 with an indoor bar and dining room, along with an outside beer garden featuring wooden picnic style tables, and a 360-degree entertainment “Great Wall of Rock” displaying legendary rock icons on oversized canvases, along with album art hung on the walls. The lively restaurant has concert lighting, and multiple flat screens showing some of the greatest rock concerts of all time. 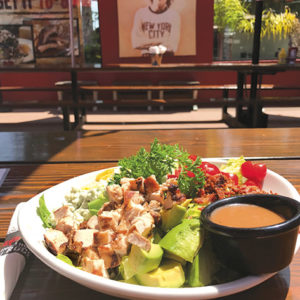 Burgers and fries, above right, and crisp delicious salads, like the Cobb are crowd favorites at Rock & Brews in El Segundo and at LAX. (photo by Jill Weinlein)

We sat at a table under an umbrella and studied the beer menu, which has a selection of lagers, pilsners, pale ales, fruit, malty, hoppy, Belgian and dark beers. Our knowledgeable server helped us with our beverage selection and food pairings. Under “Opening Acts,”  we selected Sgt. Pepper’s jalapeño poppers, guacamole toast and barbecue chicken sliders.

The menu offers eight different salads, and I ordered the Hotel California Cobb with chopped grilled chicken, applewood smoked bacon, artisan blue cheese, avocado, sweet grape tomatoes and a  hard boiled egg dressed with a balsamic vinaigrette. Another appealing salad is the Strawberry Fields made with baby greens, fresh strawberries, sliced avocado, cucumbers and red onions with a sprinkling of candied walnuts and feta cheese, before dressed with a pleasing lemon pepper vinaigrette.

Big City Red’s are half pound, all beef hot dogs served on a sesame brioche bun with either natural fries or coleslaw.

My husband ordered from the Headliner section a fresh ahi and avocado sandwich. It was served on a soft, sesame brioche bun that had a spread of wasabi aioli. All burgers and sandwiches are served with choice of natural fries, potato salad, pasta salad or coleslaw. Diners can substitute grilled vegetables, a cup of soup, sweet potato fries, onion rings, fresh fruit, or side of Rockin’ or Caesar salad for a minimal additional charge.

The others at our table ordered burgers and crispy, thick fries. The gastropub burger was layered with a sunny-side up egg, bacon, caramelized onions, baby greens, sliced tomato and a garlic aioli spread. It was juicy and filled with savory flavors.

Rock & Brews connects with the community through philanthropic efforts, like supporting veterans and active military organizations.

Recently Zislis and Dave and Dell Furano celebrated with KISS’s Simmons and Stanley the “Bar of the Year” award at the 2017 Airport Food & Beverage (FAB) Conference in Toronto. The FAB awards recognize the best and most innovative concepts in travel-related food and beverage.