Mitchell, chair of the state Senate Budget and Fiscal Review Committee, has been involved with NCSL for more than 25 years, first at the staff level in welfare reform workgroups and later as an elected lawmaker. The new appointment is for a one-year term. 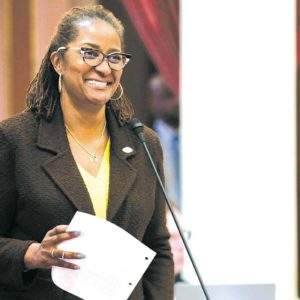 “NCSL has continued to be a champion of state legislators and staff for more than 40 years due to its bipartisan commitment and expert governance,” Mitchell said. “I share NCSL’s vision statement and also bring my deep commitment to public service and belief that good governance is a core expression of our collective values.”

“[Sen. Hollywood J. Mitchell] is a thoughtful, deliberative and influential policymaker, and demonstrates a wide breadth of expertise on every standing committee that she serves on,” De León said. “Also noteworthy is Senator Mitchell’s relentless commitment to equity and justice for vulnerable populations. [She is] a tremendous asset to NCSL’s executive committee and all of NCSL’s efforts to expand its outreach in California and throughout the nation.”

Mitchell’s appointment took effect immediately and comes approximately six weeks after her state Senate committee reviewed the multi-billion-dollar state budget. Overseeing disbursement of NCSL funds is one of the primary responsibilities of the executive committee. NCSL was established in 1975 as a bipartisan resource to serve state the legislators and their staff. For information, visit ncsl.org and senate.ca.gov/mitchell.

Brown welcomes Norway to Under2 Coalition