The city of Los Angeles will give free trees to residents willing to water and maintain them, and the Mid City West Community Council (MCWCC) hopes people will take the city up on its offer as part of a pilot project launching on Saturday, Aug. 26.

The MCWCC is partnering with the Koreatown Youth and Community Center (KYCC) for the Rosewood Greenway Project, an effort to create more greenery and shade along Rosewood Avenue between Fairfax and La Brea avenues. Representatives of MCWCC and KYCC will walk Rosewood Avenue on Saturday, knocking on doors and asking residents to sign forms giving the city permission to provide trees that KYCC will later plant along parkways. The goal is to create a more continuous canopy along residential streets, which will make them more pedestrian-friendly. 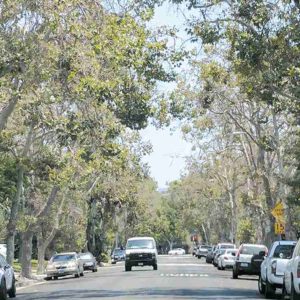 The Mid City West Council used Drexel Avenue as an example of a street in the local area with street trees that form a canopy. (photo by Nick Solish)

“Trees have amazing benefits for the neighborhood,” said Nick Solish, who initiated the project as co-chairman of the MCWCC’s Transportation, Parking and Streetscape Committee. “The overall goal is to get as many people as possible to plant trees.”

The main benefit trees provide – besides beautification – is shade, Solish said. They can lower temperatures by 10 to 15 degrees under their canopies and reduce the “heat island effect,” in which concrete and asphalt surfaces retain heat. Trees also improve air quality by providing carbon dioxide.

“It’s really about walkability,” Solish said. “If you plant a bunch of trees and have shaded sidewalks, it encourages more people to walk.”

Rosewood Avenue was selected because the MCWCC is already working on improvements there under the Bicycle Friendly Streets plan. The council has received a commitment from the Los Angeles County Metropolitan Transportation Authority and the city of Los Angeles for $2.3 million to install amenities along Rosewood Avenue (as well as Formosa Street/Alta Vista Avenue and Romaine Street) to make it more bicycle-friendly. The Rosewood Greenway Project fits nicely with that goal, said MCWCC Chairman Scott Epstein.

“We are really excited about this,” Epstein added. “Shade is a huge benefit to encourage people to walk. We thought, let’s start with Rosewood. The need is there. We want to identify places where there aren’t trees, and the city gives [trees] to us for free, which is pretty amazing.”

The free trees being offered are golden medallion trees, also known cassia trees, Brisbane box trees and black acacias. Each tree grows to a different size, which is useful based on the amount of room that is available, Solish said. The trees were chosen by the city based on their ability to provide shade and other benefits while not damaging sidewalks and infrastructure.

Will Levegood, community engagement coordinator for KYCC, said the organization is grateful for the partnership with MCWCC. Although based in Koreatown, the organization has offices in other locations throughout Los Angeles and provides a variety of services, from affordable housing and supportive services to graffiti removal and tree planting.

“It’s always cool to get a community group that reaches out and says, ‘hey, we want to do this,’” Levegood said. “I am excited about Saturday and hopefully getting people to plant some trees. It’s a good start.”

Depending on the number of people who commit to having trees planted, Solish said, MCWCC will consider expanding the program to other local streets. He used Drexel Avenue, which is south of Third Street and west of Fairfax Avenue, as an example of a street with a mature tree canopy that the council is hoping to emulate.

“We will start with Rosewood and see how it goes,” Solish said. “The idea is it’s the easiest thing you can do to fight climate change. We get a lot of people walking in this neighborhood, and wouldn’t it be nice to walk under a shaded canopy most of the time?”

All Los Angeles property owners can request free trees for homes or parkways by visiting cityplants.org. Solish said the MCWCC is also looking for volunteers who want to participate in the canvassing along Rosewood Avenue on Aug. 26. The group will meet at 9 a.m. at Rosewood Gardens Park, at the corner of Rosewood and Fairfax avenues. The canvassing is expected to last until noon.

WeHo Pedals is cruising right along