Magician ‘shines’ in shows at the Sofitel Hotel

Longtime Hancock Park resident and master magician Bernie Shine is performing his “tabletop” show in “Magic Salons” on select evenings at the Sofitel Hotel. The next salons are on Friday, Aug. 25, and Saturday, Aug. 26, and Friday, Sept. 1 and Saturday, Sept. 2. 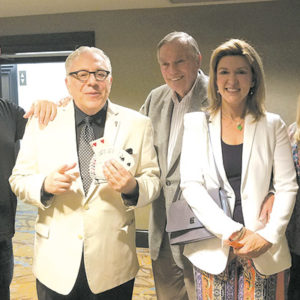 Shine combines playing card wizardry with mind-boggling mentalism. His magic is close-up and personal, intimate and inexplicable. He has been described as “reclusive and exclusive,” a performer who quietly chooses his venues in his own unique manner. Shine was a frequent performer in the early days of the Magic Castle in the 1970s, but now rarely does public performances. A recent show attendee, “Hollywood Squares” host Peter Marshall, said, “Bernie Shine is one of the most fascinating and charming men my wife and I have had the pleasure of knowing. We would watch him perform anywhere, anytime. He’s got old school charm and that’s what we like. There are lots of magicians, but he’s different. He’ll mesmerize your heart.”

Shine is a retired attorney who has created many original magical effects. One of his fellow performers, Phoenix mentalist Brett Barry, has aptly described him as “A legend within a mystery.” And British actor/magician Andy Nyman, has noted “I love watching Bernie do magic. It’s like stepping back in time to the glory days at the Magic Castle.”

Defendant sentenced for stealing millions of dollars from LAUSD