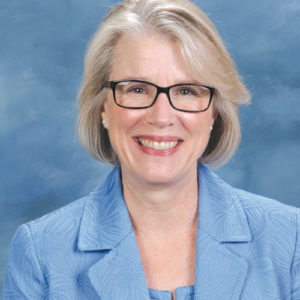 Holmquist, the former assistant principal for ministry, will provide leadership in the design, development, implementation, evaluation and coordination of programs and activities to sustain and promote the school’s Catholic identity, Ignatian heritage and Jesuit mission. She will continue her work as the co-director of the Office of Adult Spirituality at Loyola.

“Though the entire Loyola community works together to advance the Ignatian mission of the school, Dr. Holmquist will now coordinate and direct those efforts on campus as well as at the local, archdiocesan, provincial and national levels. This type of work was initiated at the Jesuit university level and is now being pioneered at Jesuit high schools across the country,” said Fr. Gregory M. Goethals. “Lay leadership is pivotal in this rapidly changing world. Given her distinguished career and tenure at Loyola, Dr. Holmquist brings a depth of experience to the new role as she continues to articulate and act on the vision and philosophy of Jesuit education that forms ‘Men and Women for and with Others.’ Dr. Holmquist’s role will be essential for the 21st century Loyola.”

Holmquist will work closely with the president, principal, board of directors, faculty, staff, parents, alumni and the new Mission Advisory Council. She will report directly to the president and will be a member of the president’s cabinet.

“It is a true honor to partner with Fr. Goethals to help animate Loyola’s Jesuit mission and support its Catholic identity, as well as to help preserve its heritage and values,” Holmquist said. “I look forward to this next step as we respond to the sign of the times to educate persons of competence, conscience and compassion who are committed to working for the freedom and dignity of all peoples. And, as members of the Loyola community, they are willing to do so in cooperation with others equally dedicated to the reform of society.”