After months of speculation, Mayor Eric Garcetti announced at a July 31 press conference that Los Angeles will host the 2028 Summer Olympic and Paralympic Games, following the 2024 Games in Paris.

“Today, we take a major step toward bringing the games back to our city for the first time in a generation and begin a new chapter in L.A.’s timeless Olympic story,” Garcetti said.

Earlier this year, the International Olympic Committee (IOC) made the unprecedented decision to award the next two available Summer Games in the same bid year. Members of LA 2024, the city’s Olympic exploratory committee (which has since changed its name to LA 2028), initially said they were only bidding for 2024. 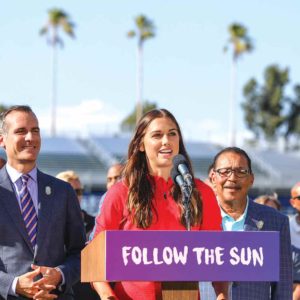 Then they agreed, along with their counterparts in Paris, to negotiate with the IOC over which year each city would get to host. The IOC will make contributions to the L.A. organizing committee valued at $1.8 billion as incentive to wait another four years.

“This opportunity is unprecedented from every vantage point – sports, infrastructure, social programs, finance – it is a big win for Los Angeles,” said Casey Wasserman, chairman of LA 2028.

The agreement to have Paris host in 2024 followed by L.A. in 2028 is now pending ratification by the I.O.C. this September in Peru. Tokyo will host the 2020 Summer Games. The U.S. has not hosted the games since the 2002 Winter Olympics in Salt Lake City, and L.A. last hosted in 1984.

Councilman Mitch O’Farrell, 13th District, a member of the City Council’s Ad Hoc Olympic Committee, has said logistical challenges of waiting four more years include seeing how many of the projected 2024 sponsors will participate in 2028.

“We will work diligently to iron out details that are even more beneficial to Los Angeles, and I stand with Mayor Garcetti in pledging to bring a profitable, world-class Olympics to our great city for the third time,” O’Farrell said in a statement.

The 2024 Games in Paris will mark the 100th anniversary of the city hosting the 1924 Games. Paris and Los Angeles will also join London as the only three cities to host the Summer or Winter Games three times. The selection ends a two-year process that began with Boston as the United States Olympic Committee’s preferred choice as a potential U.S. host.

Approximately 83 percent of respondents in Los Angeles County said they want L.A. to host the 2028 Games, according to a Loyola Marymount University survey. Last year, a survey by the university showed 88 percent support for bringing the 2024 Games to L.A. A recent IOC survey said 78 percent of Angelenos supported the 2024 bid.

The 11-year wait to host the games gives Los Angeles additional time to address infrastructure needs of the athletes, residents and visitors who will come to the city. Metro’s Purple Line Extension is expected to be in operation by then, and the city of West Hollywood has been working to add more public transportation.

The city of Los Angeles’ Ad Hoc Olympic Committee will meet on Friday before the City Council votes on whether to proceed. Leading up to the 1984 Games, with cost concerns and Cold War tensions, the City Council under then-Mayor Tom Bradley voted 8-7 to bring the games to L.A.

This City Council has already made several unanimous votes to proceed as the bid progressed. Council members have been optimistic that Los Angeles will close the games with revenues that can be put toward youth sports programs countywide.

“The opportunity to again host the games is a golden occasion further strengthening L.A.,” Council President Herb Wesson, 10th District, said, “not just through bricks and mortar, but through new opportunities for our communities to watch, play and benefit from sport.”