The Los Angeles City Council voted 12-0 last Friday to host the 2028 Olympic and Paralympic Games, culminating a two-year bid process that started with the city’s sights set on 2024.

City officials said they were open to working out a deal with the International Olympic Committee (IOC) after its president announced earlier this year that a dual bid for 2024 and 2028 was a possibility. Earlier this month, Mayor Eric Garcetti announced that L.A. will host in 2028, following Paris in 2024. Tokyo has already been selected to host the 2020 Summer Games. 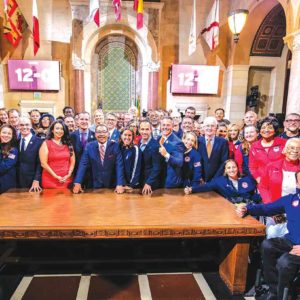 The City Council’s Ad Hoc Olympic Committee and LA 2028, the city’s Olympic exploratory committee, will now sort through the financial uncertainties, such as whether there will be state funding. Councilman Mitch O’Farrell, 13th District, lauded the deal.

“I fought for a smarter approach to plan the games, leveraging existing venues for sporting events and for the Olympic Village, saving billions in the process,” O’Farrell said in a statement. “I also advocated for a more robust insurance package to cover unforeseen financial losses in case of an emergency. The new contract for the 2028 Games will include an infusion of money into the city well before the start of the games, such as $160 million in unprecedented funding for youth programming in areas of our city that need it the most. I am confident we are on the right track, and I will continue to fight to ensure we are left in a better position after the games.”

Councilman David Ryu, 4th District, said the 2028 Games “could be an amazing opportunity for our city”; but a new budget, renegotiated venue agreements and a new financial guarantee from the state are “three loose ends that need to be tied up.”

“If any of these do not come through,” Ryu said in a statement, “I will push for our city to end this agreement. This contract must be executed in the best interest of our taxpayers.”

In the 1970s, the city of Denver backed out of hosting the 1976 Winter Games due to concerns about costs and environmental impacts. Residents opposing the games in L.A. have been raising similar concerns at Ad Hoc Olympic Committee meetings. The group NOlympics has been leading a campaign against the Olympic bid as well.

Before the City Council vote, a group of residents in City Hall started chanting, asking for public comment on the item. Council President Herb Wesson denied comment, citing the committee meetings as ample opportunity to comment.

During L.A.’s bid for the 2024 Games, the California State Legislature passed a bill to provide up to $250 million to offset any cost overruns. Assembly Speaker Anthony Rendon (D-Paramount) said in a letter to the City Council that he will work with the state Assembly and Senate to provide financial support for the 2028 Games; however, to meet an Aug. 18 IOC deadline, the council had to vote before receiving any guarantees.

“It is about what will happen in between now and then,” he said in a statement, “the progress we will make, the principles that will guide us and most importantly, the young people we will inspire.”