Councilmen Paul Koretz, 5th District, and David Ryu, 4th District, held a press conference on the steps of City Hall to support a bill from the state Senate that would require 100 percent renewable energy to power California by 2045.

Koretz praised the bill, SB 100, as a way for California to remain among the world leaders implementing alternative energy polices and combatting climate change. After passing the Senate by a 25-13 vote, the bill is pending in the Assembly.

“If you had told me at the beginning of my political career how far along we would be on the road to climate chaos in 2017, I never would have believed it,” Koretz said. “In climate change, we face the greatest and most critical challenge any generation has ever faced in the history of the planet. And with strong focus, actual leadership, as opposed to what’s happening in Washington, D.C., we will pull off a clean energy future – because we must.” 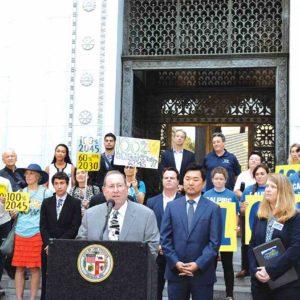 The councilman pointed to Hurricane Harvey, which has devastated the Gulf region, especially Houston, with rainfall causing flooding, as a symptom of climate change. Harvey was downgraded to a tropical storm after it came ashore last Friday.

“Climate change is not happening to our children and our grandchildren,” Koretz said. “It’s happening to us, right now in real time.”

The majority of scientists at organizations throughout the world have supported claims that human activity is contributing to climate change. But President Donald J. Trump has sided with the minority in the scientific community denouncing the link between humans and climate change, and that policy can reverse the trend.

“Scientists have made it clear,” Ryu said. “We must stop burning fossil fuels in order to spare our children and their children from the devastating effects of climate change.

“The White House has turned its back on renewable energy and environmental justice. However, California will continue to lead our country with a clean environment and thousands of new green jobs by passing SB 100.”

Seven of the top 10 cities listed in the American Lung Association’s “State of the Air 2017” report as the most ozone-polluted cities are in California. The Los Angeles and Long Beach metropolitan area ranks first.

“We will create healthier neighborhoods for future generations,” Ryu said after mentioning the local air quality.

Countries and cities all over the world have been setting their own renewable energy goals. San Diego, Atlanta and Aspen, Colorado, are three of the U.S. cities that have joined the movement. Two years ago, Hawaii became the first to enact statewide legislation requiring 100 percent renewable energy, also targeting 2045. In Los Angeles, the Department of Water and Power has been making strides each year to power the city with renewable sources. The DWP’s renewable energy portfolio reached 29 percent in 2016, up from 21 percent in 2015, according to DWP estimates.

“I won’t be old enough to drive for three more years, and I won’t be able to vote for five more,” he said. “The fact that our president says the concept of global warming is a hoax created by and for the Chinese, and the fact that the EPA is now dodging questions on climate means that we need to get all the hope that we can.”

In a 2012 tweet, Trump accused the Chinese of perpetuating climate change concerns for their economic benefit. Since Trump was elected, he appointed Scott Pruitt, former attorney general of Oklahoma and climate change skeptic, to lead the Environmental Protection Agency. The president’s rhetoric on climate, rollbacks of environmental regulations and decision to remove the U.S. from the Paris Climate Accord have also been at odds with public opinion polling.

“I stand before you, I am the next generation. Do I get a say?” Simard said.

How to help people affected by Hurricane Harvey flooding