‘How To Make the Universe Right’ at the Fowler

Organized by the Fowler Museum at UCLA, “How to Make the Universe Right,” an installation of painted religious scrolls, ceremonial clothing, and ritual objects of the Yao, Tày, Sán Dìu, Sán Chay and other populations of northern Vietnam, southern China, and nearby regions, is on display through Jan. 7.

These works of art, most of which date to the late 19th and early 20th centuries, are central to the ordination and initiation ceremonies of new priests and shamans. These religious practitioners serve as intermediaries between the physical and spiritual worlds and between the community and deities. The rituals they perform help “make the universe right.” The exhibition offers a rare opportunity to explore an extensive collection of more than 200 ritual objects that serve to further the understanding of these little-known cultures. 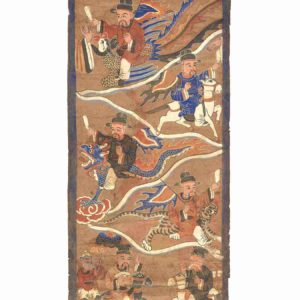 Works from the exhibit pertain to the ordination and initiation ceremonies of new priests and shamans. (photo courtesy of the Fowler Museum)

Many of these communities originally lived in the southwestern and southern provinces of China, and began to migrate to the mountainous regions of northern Vietnam several hundred years ago. The Yao’s practices are most prominently associated with Daoism, a religious and philosophical tradition of Chinese origin. For the other peoples, the beliefs and deities of Daoism are combined with aspects of Buddhism, Hinduism and Confucianism. The resulting artworks offer highly detailed representations of a sophisticated pantheon, and are essential for invoking spirits during ceremonies and for transmitting knowledge between generations.

Notable pieces in the exhibition include avibrantly colored and intricately embroidered ritual robes and headdresses, and a spectacular set of 18 scrolls of elaborately painted deities, made for those engaged in the higher levels of initiation. “How to Make the Universe Right” also features a display evoking the temporary shrines constructed for ceremonies; a film on contemporary religious practices in the region; a selection of scrolls highlighting recent conservation of the objects at the Fowler; and an interactive iPad display of 18 scrolls.