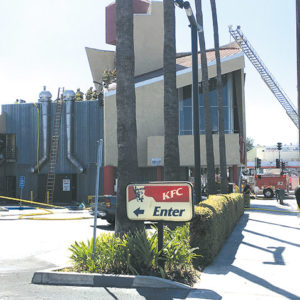 Firefighters climbed on the roof of a fast food restaurant on Western Avenue to extinguish a blaze in the walls and eaves. (photo by Jaclyn Cosgrove)

Firefighters extinguished a blaze at a fast food restaurant on Western Avenue on Aug. 20 that erupted in the walls and the eaves of the building’s roof. The fire was reported at approximately 2:16 p.m. at a Kentucky Fried Chicken restaurant at 340 N. Western Ave. Firefighters responded and found smoke emanating from the roof. Forty firefighters extinguished the blaze in 36 minutes, and prevented it from spreading to the interior of the building.

No injuries were reported and the cause remains under investigation.